The restaurant is bringing plant-based food to the masses. 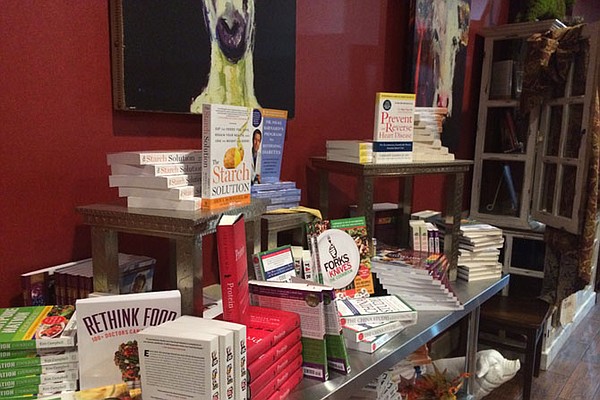 There’s one green sign that stands out amid a sea of red in the K-Mart shopping center these days. “GREENFARE,” it reads, the storefront nestled in a corner of the plaza.

Blink and you’d have missed the opening of this all-vegan restaurant, which took place amid a flurry of activity. What was merely a glimmer in the eye of chief executive officer Gwyn Whittaker in May came to fruition in early November – lightning speed in the restaurant business.

“We signed the lease in I think mid-September, had a soft opening in October, and then opened the restaurant on Nov. 1,” Whittaker said.

But while the restaurant has gone from dream to reality over the course of several months, Whittaker says the pieces have been slowly falling into place for years. After losing a partner to heart disease six years ago, Whittaker decided to make a change.

“Three years (after her partner’s death), my current boyfriend introduced me to a film called ‘Forks Over Knives,’ with Colin Campbell, and so I saw that. And it was really inspiring to me,” Whittaker said. “And I reached out to Colin Campbell and … went up and met with him at Cornell in Ithaca and said, you know, ‘I love what you’re doing.’ The whole story about being able to age gracefully without pain and medication is so inspiring. We’re so ingrained in chronic illness and medication in the United States.”

Through GreenFare, Whittaker aims to bring healthy, plant-based food to Herndon and the surrounding area, and so far, the community is responding. Word has gotten out in the vegetarian community about the new vegan restaurant down the road, and all three special events the restaurant has hosted since opening have sold out.

“We’re intentionally calling this place a ‘healthy restaurant’ instead of a vegan restaurant, although there are no animal products here,” Whittaker said. “… It’s the broad tent … we want to be hospitable to people that are in it for ethical reasons, people that are in it for environmental reasons,” as well as people who have pursued a plant-based diet for health reasons.

FIRST-TIME VISITORS to GreenFare may be surprised at the menu, which looks limited at first glance with fewer than a dozen options. Whittaker says her chefs emphasize quality over quantity of choices, and the benefits of that trade-off appear quite clear when tasting the hearty, flavorful, fresh food.

“Our menu is fairly short compared to other restaurants. We try to have like seven to eight things that are fantastic instead of 50 things that are mediocre,” Whittaker said. “… It’s like going to somebody’s house and having some choices.”

And those choices are rich and flavorful. Any would-be carnivore won’t miss the meat in GreenFare’s offerings, and plant-based eaters will be thrilled by the array of fresh seasonal vegetables on display in each entrée at any given time.

“Everybody else loves the lasagna – it’s this fantastic, hearty lasagna. It’s got pine nut topping that resembles dairy, it’s studded with all these beautiful vegetables,” Whittaker said. “And we just added something new to the menu in the past couple of weeks called the creamy chickpea and kale casserole, and that’s my favorite. … It’s a comfort food.”

But the restaurant extends well beyond the food itself. GreenFare hosts events with speakers on specific nutritional and health topics, as well as sells an array of books focused on plant-based diets. Further, Whittaker and her team organize “kick-start” diet plans for those people looking to embark on a new, healthier way of eating.

While it would appear that Whittaker and her team have their hands full with the restaurant already, she says she’s looking beyond the café’s four walls in the new year to bring healthy food to even more residents. Next stop: Commuters.

“We’re planning to do a kiosk at the Reston Metro starting in January” offering ready-to-go meals, Whittaker said. That way, commuters who find themselves too tired to cook or pack something healthy can still enjoy an organic, plant-based meal.

WHITTAKER says she’s been pleased by the warm welcome of the community thus far -- “We have a lot of repeat customers, which is always great” – and that she’s looking forward to growing GreenFare in the coming months and years.

“There’s a lot of really wonderful people that thank us for opening this restaurant and want us to be part of the community,” Whittaker said. And from events to a new Metro kiosk, from clean-eating kick-start plans to book signings, it looks like GreenFare’s relationship with Herndon and the region has only just begun.