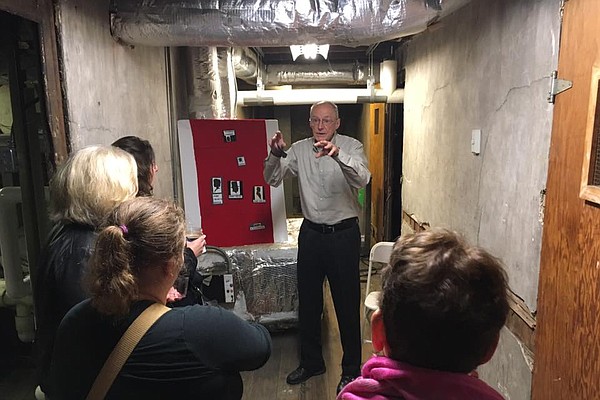 Many Old Town Alexandrians are protective of their city. For some, that defensiveness continues beyond the grave. With 267 years of history, Alexandria is a city fraught with supernatural hauntings.

2016 marks the 200th anniversary of Alexandria’s most enduring mystery: The Female Stranger.

Liz Williams, museum director of Gadsby’s Tavern, said there’s at least four or five different versions of the story, ranging from those based largely in historical fact to some that are truly bizarre.

“The most popular, and the most widely used, is about this woman whose very ill,” said Williams. “She and her travelling companion came to Gadsby’s in September or October of 1816. She arrived to the building sick and was brought upstairs to a lodging room. Her companion asks for a doctor, whom he asks to swear to secrecy for their identity. Doctor Richards tries to help, but she passed away.”

The Female Stranger reportedly died in the tavern’s Room Eight and the site has become the center of Female Stranger-related hauntings. She was taken to St. Paul’s Episcopal Church Cemetery, where an elevated marble slab marks her grave. The grave marker’s inscription only identifies her as “Female Stranger,” accompanied by an inscription as cryptic as it is lovingly written.

The identity of the Female Stranger has been the subject of rumor and speculation throughout the city.

“There are some fairly wild theories,” said Williams. “The most popular is that she was Theodosia Burr [daughter of Aaron Burr], but the dates don’t really match up. She was shipwrecked off the coast of North Carolina. In some stories she passed away in the shipwreck. In others pirates captured her but she escaped and made her way to Alexandria.”

But the Theodosia Burr theory isn’t the strangest speculation about the Female Stranger. “The Narrative of John Trust,” written in 1883 by William Francis Crane and purportedly based in fact, depicts an elaborate love triangle between between two men competing for the affections of a woman named Blanche Fordan. A magician and hypnotist named John Rowe steals Fordan away from John Trust, absconding with the beautiful young Fordan to Alexandria, where she grows ill and on her deathbed pleads with Rowe to tell Trust that he was the true love of her life.

Williams says there’s been several deaths that occurred around the tavern over the years, from murders in the street to the death of a famous 19th century actress inside.

“I’ve never experienced a ghost in the tavern myself,” said Williams, “but you never know.”

While the story of the Female Stranger is one of the city’s most popular myths, it’s difficult to find a street in Old Town that doesn’t have its own haunting or legend. Wellington Watts, who runs Alexandria Colonial Tours, has given tours through the city for 17 years. Watts’ favorite is the story of the Female Stranger, but he says there’s plenty of other good ones throughout the town. In one privately owned home in Old Town, which he refuses to identify for the sake of the current occupants, Watts says a murder went undiscovered for over a century before its haunting nearly drove the upstairs neighbors mad.

In the story, sometime in the early 1800s a doctor or dentist is murdered in the home for reasons unknown. He’s carried into the basement well, where his body is dumped and left to decay. Years pass, residents come and go, until in the 1970s the apartment has new owners living in the home above. These owners begin to have horrific nightmares night after night, and eventually one tenant decides to go down into the basement of the house to snoop around. He opens the lid of the well and peers inside, seeing a skeleton in a crumpled heap at the bottom, the knife still lodged in his eye.

Murders and tragic loves are popular themes in Alexandria’s hauntings. Another favorite of Watts’ roams the dark alleyways of St. Asaph Street. Around the early 1900s, a man named Clem loved a woman named Rose, but his feelings were not reciprocated. As she developed a relationship with a local butcher, Clem descended further into madness and paranoia. He swore revenge on Rose, saying he wouldn’t let any other man have her. He went to her home and cut her throat, and after doing so slit his own, thinking he would join her in the spirit world. But Rose had only fainted from the shock and the blood loss. She survived the attack, leaving Clem stranded alone on the other side.

“It’s said Clem comes back, prowling the streets with a bloody razor looking to finish the job,” said Watts. “If you hear footsteps behind you on St. Asaph’s street, you have to turn around quickly to look. Sometimes, every now and then, people might see faint splashes of blood on the sidewalk.”

For local historian and former Alexandria Gazette reporter Michael Lee Pope, the supernatural side of ghost stories is just the icing on the historical cake. Pope, the author of “Ghost Stories of Alexandria,” the fascination with ghosts stems from actual historical accounts.

“They’re good stories, that’s what it comes down to,” said Pope. “That’s why they endure. The events that lead to the haunting are what’s so fascinating, the ghosts themselves are almost secondary. Ghost stories are just a way we tell our history.”

While many Alexandrians argue over the Civil War, some Alexandrian ghosts are still fighting an older war. Pope’s book begins with the story of 210 Prince St., where in the 1930s a real estate agent was showing the home to a visiting British woman. As the two began to move upstairs, the British woman found herself suddenly stopped mid-step. She was rooted in place, unable to take any steps further up into the building. Over the years, other supernatural hauntings were reported at the site, including walking specters of a man dressed in full colonial garb. Most of the hauntings were cordial enough, except the ghost is said to have a hatred of all things British.

According to Pope, there are different accounts of the ghost's’ identity. Some say the specter is Colonel Michael Swope, an American commander captured and severely mistreated on a prison barge. When he was finally released, he was forced to walk hundreds of miles from his place of release to his Alexandria home. Pope says other legends attribute the ghost to John Dixon, a wealthy Alexandria merchant who once owned the house and was executed by the British as a spy.

In another home a few doors away, the cycle of British vs American violence against spies continued in the War of 1812. As the British were preparing to invade Alexandria, two British spies were reportedly captured and dragged into the building, where they were hanged in the living room and left as a message to the British forces. Pope attributes the telling of the ghost story to Watts, who says a little boy approached him on one tour and confessed that he’d seen the ghosts in the house. The boy reportedly told Watts that he’d seen the ghosts, presumably the spies, still hanging from the ceiling in the living room.

While many of Old Town’s hauntings are rooted in several encounters, others like the swinging spies come from a single source. Pope says one of the most bizarre supernatural sightings is attributed to one man, Louie Robert, who owned a framing shop on Cameron Street. Robert said stories had been passed down to him over the years of an ancient Devil-Bat that’s watched over the city since its colonial origins. Since 1817, when the clock tower for city hall was built, Robert said the Devil-Bat made that its home, even returning to roost after a fire destroyed it and the tower was rebuilt in 1871. The Devil-Bat reportedly kept a wary eye on outsiders to the town and would terrorize those who came to the city to cause trouble. While several had reportedly caught glimpses of the creature flying over the city, the most visible appearance was when it reportedly swooped down into a crowd of drunken sailors marauding through the city. The bat attacked the crowd, forcing them to scatter. Pope says the legend goes that some at the time credited the Devil-Bat with saving City Hall.