Income disparity is highest in Arlandria, which trails the city in median household income. 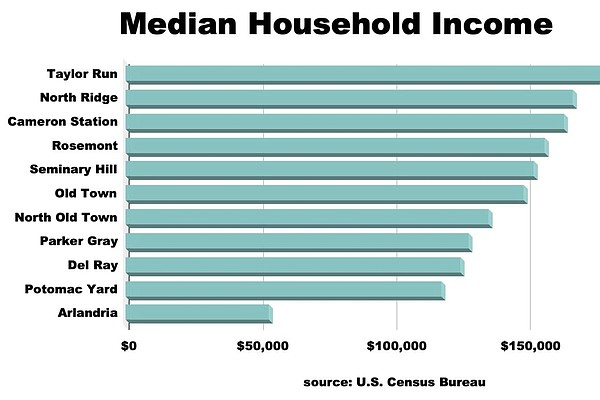 Taylor Run is about three miles from Arlandria. But it might as well be on the other side of the planet in terms of median household income.

Census records show that the leafy suburban Taylor Run neighborhood, which is just behind the George Washington Masonic Memorial, has the highest median household income in Alexandria, more than $180,000 a year. The low-income neighborhood of Latino residents near the border with Arlington, on the other hand, has the lowest, less than $55,000 a year.

“We’re quiet and hard-working folks, very hard working, hence our number,” says Councilman John Taylor Chapman, who has lived in Taylor Run since he was in high school. “I think it’s reflective of the households where we have double-income earners, who are probably executives or mid-level to upper-level people in their organizations.”

At the other end of the spectrum is Arlandria, a neighborhood that is home to a large population of low-income Latino residents who are renters. As the region prepares for the arrival of the new Amazon headquarters across the border with Arlington, many people are worried about what will happen to all those low-income renters once their landlords get hit with higher property taxes.

“Those renters are going to be forced to move somewhere else,” says Frank Shafroth, director of the Center for State and Local Leadership at George Mason University. “It’s certainly what we saw in Arlington a long time ago, and the county put a lot of effort into ensuring there would not be forced displacement out of the county, so there was a lot of assistance for Section 8 and elderly housing.”

Over the summer, Tenants and Workers United published findings of a survey about income in Arlandria. The neighborhood advocacy organization concluded that low-cost housing is needed to prevent displacement and gentrification of low-income Latino residents near the new Amazon headquarters across the border in Arlington. Specially, the group is asking for housing programs to focus on the two-thirds of households that earn less than 30 percent of area median income.

“Since they announced Amazon, the rents have already increased,” said Evelin Urrutia, executive director of Tenants and Workers United. “The city has to be creative and bold on decisions about development in Arlandria because we want to make sure this community stays.”