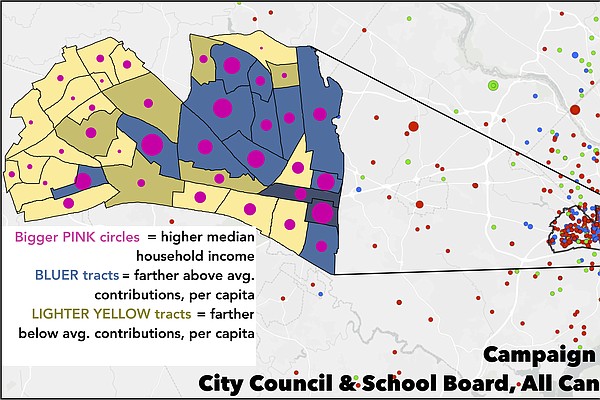 This is the fifth and last in an intermittent series to help citizens visualize relevant data, relationships, and trends in the city’s geographic context.

“Individuals don’t want to be the face of anything. They don’t want to be … seen as someone that possibly is causing issues, or going against the powers that be.” — Chris Harris, President, Alexandria NAACP

These measures intend to capture a broad range of what “civic participation” might mean. Except for voting, few objective barriers prevent engaging via many other conduits. Anyone, including non-residents and non-citizens, may contribute to campaigns or speak in political forums. While local policy establishes different requirements for different local government advisory bodies, citizenship and non-felon status aren’t blanket prerequisites. Campaign donors and business association members participate from all over the metropolitan region, and in some cases from all over the Commonwealth and even the country.

PATTERNS IN THE DATA

Patterns vary by measure and applied parameters. But, in general, areas of higher participation tend to correspond roughly with whiter, wealthier and more native-born residents. In the city’s eastern half, Arlandria and East Braddock in some cases stand out as islands of relatively low participation. Arlandria comprises predominantly Hispanics; East Braddock has a relative concentration of public housing occupied overwhelmingly by African Americans. Conversely, in the city’s western half, Cameron Station in some cases stands out as an island of relatively high participation, and comprises whiter and higher-income residents than the West End as a whole.

Cameron Station is “not integrated with us [the West End] at all,” said Dianara Saget, a Latina single mother who lost a bid last year for School Board District C (West End).

Local leaders know, at least in general, that these imbalances exist.

The city’s planning processes in the past have mainly attracted “regulars” — “people who are familiar, people who have been involved before” — said City Manager Jinks this spring.

“[O]ur under-served and our under-represented families … feel that they do not have open access,” said Alexandria City Public Schools Superintendent Gregory Hutchings earlier this year. “We’ve had a practice where we have listened a lot to the loudest voice. … But there are also some voices that are a medium voice, and a small voice, and no voice.”

But what these measured imbalances “mean” — reasons, ramifications, how to mitigate — are a matter of interpretation.

Some interviewed say many lower-income residents, minorities and immigrants face external barriers to civic engagement, especially in terms of money and social connections.

Moreover, all 33 of last year’s City Council and School Board candidates, taken together, self-financed about a quarter of their campaigns. That’s according to data compiled from their state-mandated campaign finance reports filed during 2017-2018.

“Campaign finance usually starts with the low-hanging fruit — your circle of friends, your family,” said Del. Charniele Herring (D-46). “If those people are people with means, they’re going to be able to give more …. That gives somebody a competitive advantage, if they have that circle of wealth around them ….” Herring, an African-American woman who’s now an attorney, was homeless as a teen after her mother’s job loss. Not knowing a higher-giving donor base presented a challenge during her debut in state politics, she said at a panel discussion on civic activism in March.

She thinks Virginia needs some kind of campaign finance reform, such as state legislation to limit contributions or to provide public campaign financing. But bills on the subject to come forward in the General Assembly have died in committee, she said.

“Alexandria is really about whom you know. … If you’re not in that [PTA] circle, you won’t get funding, you won’t get the support,” said Saget. She says she learned “how the city works, … how to be a voice in your community” from the Parent Leadership Training Institute of Alexandria, a nonprofit.

A given council has the authority to set whatever pay it deems appropriate for the subsequently elected council, though Wilson thinks the General Assembly, which grants city/county/town charters, should adjudicate the question of part-time versus full-time city councilors in Alexandria.

Busyness plays a role. Low-income families may “have more important things to deal with” than voting, said former School Board member Bill Campbell. “They are more focused on, ‘am I able to get job, can I feed my kids,’” he said. “They are not the people who sit in coffee shops and talk about politics.” They may lack the “luxury” of a spouse who’s high-earning job enables deeper engagement in time-consuming local affairs. He recalls that his own mother, who, busy raising six children, never voted until in her 40s.

Chris Harris, president of the Alexandria NAACP, thinks the disaggregation of communities takes a toll.

“We don’t have a ‘black community’ in this city, unless it’s low-income public housing,” he said. “Now we have these satellites … where you have 4-5 units here, 10 units there, spread throughout the city. … Take those communities away, there is no community of predominantly African-Americans anywhere … in the city. That’s a problem.”

This disaggregation follows from the housing authority and city’s decades-long policy of site “scattering” and poverty “de-concentration” through redevelopment.

Cultural and language barriers also may inhibit civic participation. The city government and public schools provide limited translation services (Spanish, Amharic, Arabic), and the city is hiring new “equity” and “civic engagement” staff. But they don’t translate all of the many documents involved in the day-to-day sausage-making of local politics.

Because some immigrants come from places without similar political traditions, they’re unfamiliar with the opportunities for parent engagement, according to incoming PTA Council President Katy Mathews.

These patterns, or their effects, may trickle down to youth.

Non-participation may be “ingrained” for some adults, said RaAlim Shabazz, a T.C. Williams High School government teacher and former teacher at Howard University, a historically African-American college in Washington, D.C. So “our best chance at increasing civic engagement across east-and-west lines … in the city is to really focus on building a strong civics program,” beginning as early as elementary school. “We don’t actually teach government until senior year [of high school],” he said.

On the other hand, lower civic participate may result from subjective reasons, in addition to or in lieu of objective barriers.

Describing a kind of habituated, inherited political cynicism, Shabazz said: Some people “don’t feel like they have a stake in the government … Some have expressed: ‘Well, things really don’t change for me, no matter who wins.’ That’s kind of the message coming from some of the parents” to children.

Campbell thinks the historical inertia of racial segregation continues to take a toll. He says there’s “no doubt” that some ethnic groups in Alexandria are more reticent about engaging in PTAs, which help foster connections and pave the way for local office campaigns. The continued dominance of white moms even after integration “was not super inviting for low-income parents or families of color.”

“I don’t want to speak as if those being affected are victims, because … they may play their role in being left out and behind shut out,” said Harris.

According to William Ramsay PTA President Justin Rosario: “The Latino parents say language is a problem but a lot of them speak more than enough English to take over the PTA and considering half of the school population is Latino, I would very much like for them to be the PTA. The Muslim parents tend not to interact with anyone but other Muslim parents. The same goes for our West African parents. Our cohorts don't mingle.”