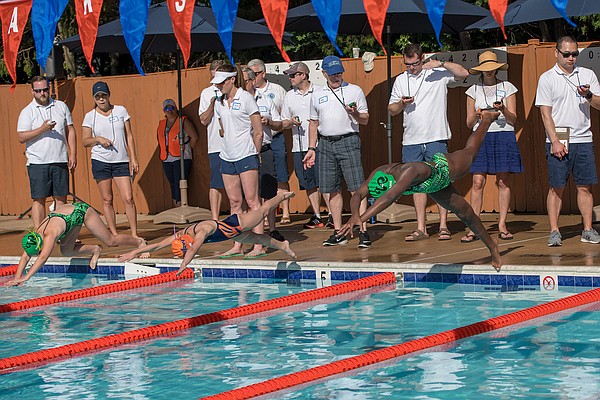 The Virginia Run Riptide swimmers kicked off their season on Saturday at their first ‘A’ meet against the Fair Oaks Sharks. The Sharks had a talented team of swimmers, winning the meet with a score of 218 to 198.

Despite the Riptide’s loss, the race was close at several points during the meet and the team came away with 98 personal bests. Perhaps the biggest highlight of the meet was 10-year-old Charis Roundtree breaking an NVSL record in the 9-10 girls 50-meter freestyle with a time of 29.43.

In a tight freestyle round, the Riptide trailed the Sharks by just two points despite a sweep in the boys 8 and under group by Tyler Harris, Matthew Kelliher, and Declan McCrea. Bryan Kim, Jackson Blansett, Ginny Fitch and Allie Hickey all placed first in their age groups.

The Riptide edged ahead of the Sharks in the backstroke round, with another sweep in the 8 and under by Nathan Tonthat, Matthew Kelliher, and Sawyer Flynn, and a first-place finishes by Nicholas Harris, Caitlin Do, Anna Kelliher, Ginny Fitch, Isabelle Cogan and Sarah Boyle.

The breast stroke proved troublesome for the Riptide as they fell behind the Sharks in points. But Davis Collingsworth and Angela Thompson both brought home a first-place finish.

The Riptide battled back during the butterfly round taking a total of 51 points to Fair Oaks’ 39 points. Tyler Harris and older brother Nicholas Harris both placed first as did Bryan Kim, Jackson Blansett, Caitlin Do, Charis Roundtree, Angela Thompson, Caitlin Kelliher, and Sarah Boyle.

Four of the relay teams put up the fastest times in all of Division 4 on Saturday: the 13-14 boys, the girls mixed age free relay, the 9-10 girls, and the 15-18 girls relay. These are the teams to watch as they head into what will be a competitive Divisional Relay Carnival.