The Kakehashi Project invites students on visit to Japan based on Japan Bowl performance. 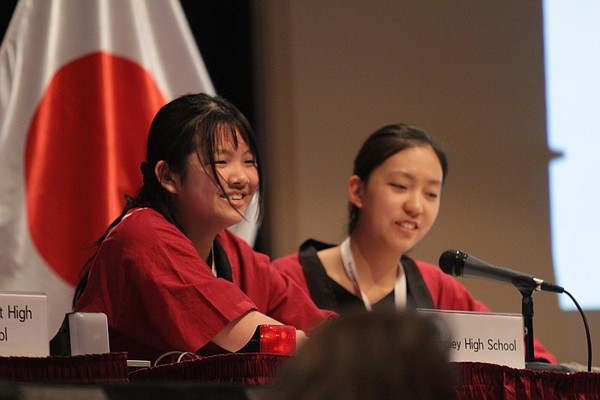 This week, high school students from Fairfax County will travel to Japan through the Japanese Ministry of Foreign Affairs’s Kakehashi Project.

The Japan Bowl is a language and culture quiz bowl-style competition for high school students in Japanese classes. More than 30 schools and 200 students from across the country gather once a year in Washington, D.C. to compete and showcase their Japanese skills.

The competition is open to anyone currently enrolled in a Level II, III or IV high school Japanese class. The Kakehashi Project selects the top performing Level IV teams to visit Japan for a week in the summer following the Bowl. While in Japan, these students will participate in school visits, homestays with host families and courtesy calls to Princess Takamado and Akie Abe, the wife of Japanese Prime Minister Shinzo Abe.

Two area students going on the trip are rising college freshmen Helena Lu Jiarui from Langley and Emily Zhai from Lake Braddock. When Lu Jiarui found out she qualified to go to Japan, she “felt this immense sense of relief.” All of her studying and preparing for the Japan Bowl had paid off, and “it wasn’t for nothing,” she said.

Zhai also put in many hours into preparations with her team for the competition. Between completing her regular school work and applying for colleges, she found time to study Japanese. She and her teammates met every Saturday to prepare, and “whenever [she] had time [she] would look at a few flashcards.”

Nancy Marsden, the director of the Japan Bowl, believes that preparing can be one of the most rewarding parts of the competition for students. “Many students also indicate to us that while preparing for the Japan Bowl can be stressful and challenging,” she said, “they also learn a great deal from it and view it as a defining experience of their high school years.”

Their efforts have paid off, and now Lu Jiarui and Zhai are excited to visit Japan and continue learning about the language and culture they have dedicated so much time to. Lu Jiarui is especially enthusiastic because “going to Japan has been my dream ever since I started high school,” she said. “I'm… just really happy I got this opportunity.”

Both students plan to continue studying Japanese in college, Zhai at Virginia Polytechnic Institute, where she plans to study abroad in Japan for a year, and Lu Jiarui at the University of Southern California. The latter attributes her choice to continue the language to her time at the competition. “I think largely because of Japan Bowl I realized I have a future in this,” she said. “I could study this.”

Lu Jiarui said Japan Bowl is a “really, really good opportunity,” and would recommend it to anyone even “vaguely interested in Japanese,” she said. Similarly, Zhai called it a “priceless experience.”