Community discusses the options for how to improve intersection near Spring Hill Elementary. 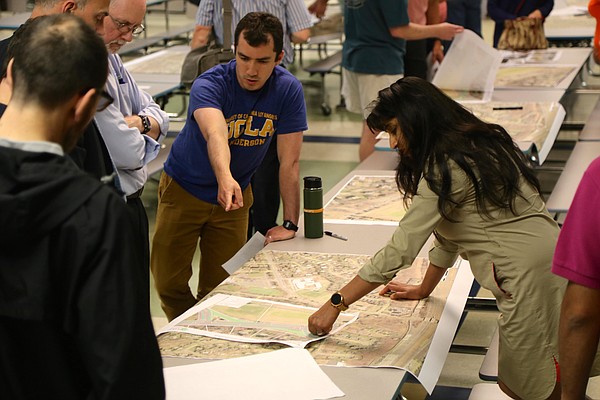 A community meeting was held on Wednesday, June 5 at Spring Hill Elementary School to discuss the plans of the Spring Hill Road and Lewinsville Road intersection improvement. Residents in attendance raised strong opinions and numerous questions:

“The traffic traps us in our homes.”

“Cars cut through our neighborhoods.”

“We can’t walk to school because of traffic.”

“Why no bike lanes?”

“Are you planning to keep the trees?”

The representatives of the Fairfax County Department of Transportation (FCDOT) gave detailed responses.

Back in May 2018, when the first public meeting was held, the FCDOT engineers presented four conceptual plans on how the intersection can be improved. The initial concern of the remodeling project was mainly focused on safety and traffic flow at this complicated spot. “The intersection has a significant skew and experiences peak hour congestion, significant cut-through traffic, long queues, and has a documented crash history,” FCDOT explained the rationale behind the planned change.

This time, the discussions were narrowed down to two revised concepts, a conventional intersection and offset T-intersection. According to their study, the second option, having two T-intersections in close proximity, seems to be safer for pedestrians, bicyclists, and drivers. Will it slow down traffic because of doubled signals and turns? The study assures that the intersection operations will be equally good in both designs and definitely better than in case of the no-build option.

Denise Balzano also lives in this area. She liked the roundabout concept introduced a year ago and now rejected. “Why have they rejected the roundabout option? They said they are not pushing the second concept, but I think they are. I think people at this meeting would actually like to say: ‘We don’t want too much traffic; we are mad because the people cut through our local neighborhoods.’ But I’m realistic. We need to do something with this intersection.”

There was no strong agreement among the participants on this topic. A no-build alternative was also an option.

“If you don’t want any of these options, just tell us that. We are fine if it is what you’re feeling about this project,” Daniel Stevens, a transportation planner at FCDOT, said.

FCDOT estimates the project cost at $2-3 million. Maggie Oi, the senior transportation planner, believes that the project will take several years to complete. “The study will take from two to three months. Depending on the findings, we’ll finish the project in three-to-five years.”

Residents can submit their feedback via the online survey through June 26, 2019.