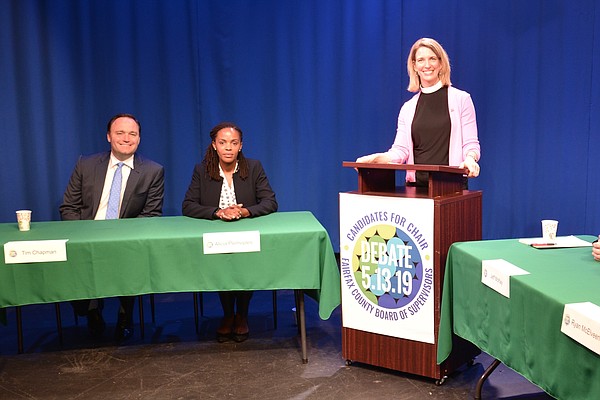 In a rare shake-up of the county’s Board of Supervisors, at least five of the 10 seats – four magisterial district representatives and the chairman – will change hands as current Chair Sharon Bulova retires at the end of this term, and Supervisors Cathy Hudgins (Hunter Mill), John Cook (Braddock), and Linda Smyth (Providence) have all declined to seek re-election. Voters will choose likely successors on Primary Election Day, Tuesday, June 11.

Lee District Supervisor Jeff McKay, who has served on the board since 2007, will vacate his seat to seek the chairmanship. Both Supervisor Penny Gross (D-Mason) and Supervisor Pat Herrity (R-Springfield) face challengers in the fall. Incumbent Supervisors Kathy Smith (D-Sully), John Foust (D-Dranesville), and Daniel Storck (D-Mt. Vernon) are running unopposed.

Democratic candidates will be on the Primary ballot for other seats on the Board of Supervisors — and there are a lot of them. Five for the Providence District, five for Hunter Mill, four in Lee and two in Braddock.

Jeff McKay is currently a Board Member, representing the constituents of the Lee District. Even with his years of immediate experience with the workings of Fairfax County government, McKay is being given a run for his money by Ryan McElveen, the At-Large Member of the Fairfax County School Board since 2012, Reston-based businessman Tim Chapman, and Georgetown law professor and founder of a public interest law center, Alicia Plerhoples.

The debates, forums and meet-and-greets featuring the four are coming fast as the Primary date approaches.

ON MONDAY, MAY 13, they participated in a televised debate at the studios of the Fairfax County Public Access Television station, hosted by Fairfax Healthy Communities Coalition and moderated by Pastor Sarah Scherschligt of Peace Lutheran Church. Scherschligt is also a board member of the nonprofit Faith Alliance for Climate Solutions. Her Faith Alliance colleagues Scott Peterson and Meg Mall were in attendance at the live event to act as timekeepers for the debaters.

The candidates were each given a few minutes for opening and closing statements, which bookended 50 minutes of questions posed by Scherschligt on topics ranging from their proposed actions to reduce greenhouse gases in the county, to how to address the affordable housing shortage, and from how to ensure implementation of the county’s One Fairfax equity directive to solutions for multi-modal transportation improvements in the region.

Throughout the event, McKay, a life-long resident of the county, emphasized not only his experience, but the relationships that he has built locally, regionally and in Richmond and beyond during his terms, citing them as one key factor separating him from his opponents.

“This is not the time to take the chance on people who don’t have the experience to run, to govern,” said McKay, insisting that those relationships and his working knowledge of the complexities of running a diverse county of more than a million residents are vital to our continued growth and success.

In addition to representing the Lee District on the board, McKay also chairs the Budget and Legislative Committees and has held leadership roles with a number of the region’s committees and task forces on transportation, revitalization and health planning, among others. McKay admits the county has problems – “Big ones that we need to solve quickly and for our future” – but he remains proud of Fairfax County and the accomplishments that its residents, businesses, nonprofits and government have created. He cites the many areas in which the area sets the example for the state and the country.

McElveen emphasized his background on the School Board — a key driver of the county’s economy and an attraction for current residents and those considering relocation of residence and/or businesses — and on the fact that he is “the only one running who has represented the entire county,” elected to the School Board at Large. He also touted his international ties through his “day job” with the Brookings Institute and other avenues, as ways in which he can expand the solutions pool and bring additional energy to the county’s affairs.

McElveen numerated climate change initiatives he has spearheaded at school facilities from installation of solar panels, to championing school gardens and salad and other healthy items on school lunch menus.

Plerhoples and Chapman both emphasized resumes as players in the private sector, able to understand the needs of that sphere and how to bring a partnership of government, nonprofits and business to the table to create solutions to the region’s challenges, Plerhoples leaning on her legal background, and Chapman as a real estate developer.

While the tone of the debate remained civil and the format did not allow for rebuttal comments, both Chapman and Plerhoples made it clear that they see the present leadership by the Fairfax County Board of Supervisors as “followers, not leaders,” in Plerhoples words, and having failed on too many of the issues and taken too long to address others like affordable housing, according to Chapman.

Adding one person and $5 million to the county’s FY2020 Budget isn’t really tackling the problem of a lack of affordable housing in Chapman’s opinion.

“We need speed and agility … the board has been more focused on large developments” rather than on the affordable developments needed by working families, county personnel and other vulnerable citizens. Chapman says it’s an issue that should have been addressed “more boldly years ago.”

Like Chapman, Plerhoples recounts that “housing instability” was something she, too, experienced growing up, and she agrees that more needs to be done and with immediacy. “This is an issue that has reached crisis level.”

On the subject of transportation in the area, all agreed that more needs to be done. McKay has been involved in all of the county’s efforts to improve roadways, expand safe biking lanes, and support Metro rail and bus transit and development around transit hubs to give more people the ability to “live, work, and play” without a painful commute.

Again, Plerhoples and Chapman argued that the county is behind on the issue and that regional partnerships need to be employed to tackle the situation more rapidly.

“We’re imprisoned in our cars … we need to look at other jurisdictions” to help solve this problem, said Chapman.

Plerhoples wants “more creative thinking on transportation.” She does not think that enough attention is being paid to solving “that first mile and the last” that keep commuters from using public transportation. She also cautions that the “transit development model” where major development takes place around transit hubs has to be monitored to avoid “gentrification” of an area that could, in turn, further exacerbate the affordable housing shortage.

Along with more multi-jurisdictional planning and fighting for the state and federal funds needed, McElveen sees the need to expand the reach of the current Metro rail system as part of the solution.

SCHERSCHLIGHT QUESTIONED how each candidate would see that the One Fairfax initiative for equity is implemented, and how “good intentions turned into actions” in projects like the Route 1 corridor Embark amendment to the Comprehensive Plan.

“One Fairfax has no teeth,” was Chapman’s response. “The chair needs to work with developers” to ensure the principles of One Fairfax are put into place.

Plerhoples says a “radical shift” is needed and is skeptical of the county’s commitment when there is only “one person on county staff dedicated to One Fairfax. Every department should have an equity officer” or the like to bring the initiative to life.

The attorney noted her own experience running a public interest law center.

McElveen applauds the One Fairfax declaration but noted that in the schools, despite the wealth of the area, there are still many children in poverty and families that struggle. Fairfax County is also home to one-third of the state’s English-as-a-Second Language students, reported McElveen, and the intentions of One Fairfax don’t always translate into meeting their needs.

As one of the architects of One Fairfax, McKay defends the doctrine as the first steps, and more than what many other jurisdictions have taken. By adopting the plan and working to add accountability and measurable results, McKay sees Fairfax County as leading the way for others, while acknowledging that “our work is still unfinished.” As chairman, McKay wants to continue that work so that “all county residents share in the equal opportunity of One Fairfax.”

The candidates will meet again on May 24, hosted by the Fairfax County Democratic Committee as they work to express their views to the voters and to differentiate themselves from each other.

With so much change at hand, and so much at stake, as Scherschligt urged at the conclusion of the televised debate, get informed and “vote like your life depends on it.”