‘Walk Down the Lane with a Happy Refrain’ in Herndon 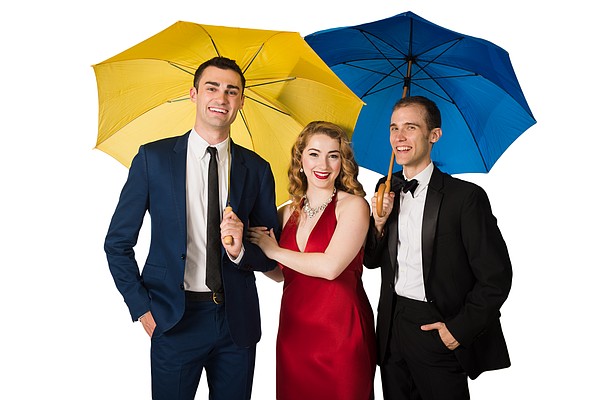 It’s not only a jaunty Hollywood movie musical, but “Singin’ in the Rain” is a live theater production, too. Full of romance and humor propelled forward with twenty sunshine-bright musical numbers with lively dancing “the production will be uniquely NextStop's,” said Evan Hoffmann, Producing Artistic Director.

For those less familiar with “Singin’ in the Rain,” it takes place in Hollywood as “talkies” take their toll on the silent screen era. It focuses on a romantic lead Don Lockwood (Wood Van Meter) and his sidekick Cosmo Brown (Robert Mintz) along with aspiring actress Kathy Selden (Morgan Kelleher). Added to that is a silent screen leading performer, Lena Lamont (Carolyn Burke) with a voice that may not be best suited for the “talkies.”

“NextStop has always produced musicals. In the past few years, we have actually expanded the number of shows that we do in total each season and that has included musicals,” said Hoffmann. “We pride ourselves on doing the most diverse collection of shows possible, in every way. Even the three musicals that we did this season came from three very different camps of musical theater; contemporary rock, Off-Broadway experimental, and American classic.”

“I have had a lifelong love of this musical.” added Hoffmann. “We are re-imagining this beautiful story with an eye towards making it more theatrical and making it more about the characters (and dancing) than the production values. All of this while simultaneously offering frequent and loving nods to the iconic imagery of the film.”

“Singin in the Rain” will feature a cast of eight talented performers who will act, sing, dance and bring forth plenty of comedy. NextStop veteran Elisa Rosman is music director in charge of breaking forth unforgettable tunes from Arthur Freed (lyrics) and Nacio Herb Brown (music). The show’s book is by Broadway legends, Betty Comden and Adolph Green. The musical tunes include the celebrated, “You Stepped Out of a Dream,” “All I Do Is Dream Of You,” “Make 'Em Laugh,” and “Good Morning.”

“It is going to be amazing! I spent nearly a year finding the eight exceptional triple-threat performers that make up this cast. They are dancing their faces off under the amazing choreography of Robert Mintz, who is pulling double duty as both our choreographer and performer,” added Hoffmann. "These are going to be some of the most impressive production numbers we have ever had on our stage.”