Site in Lorton to mark women’s struggle for right to vote. 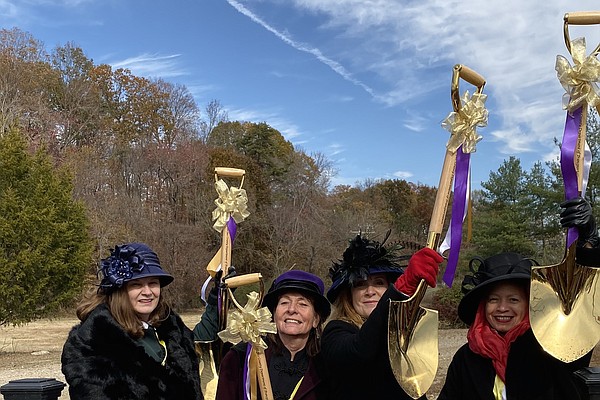 Construction for the first national suffragist memorial, the Turning Point Suffragist Memorial located in Lorton, in Fairfax County, is set to begin following its Thursday, Nov. 14, groundbreaking ceremony. “With the stroke of a pen, 25 million women entered the Constitution and secured the right to vote,” wrote Patricia Depew Wirth, Executive Director/CEO of the Turning Point Suffragist Memorial Association. “Few Americans know about the suffrage movement or its historical significance as it rarely makes it into the history textbooks.”

Fairfax County kicked off support for the needed $2 million memorial construction costs when it issued a $200,000 grant to the cause. During program remarks before the groundbreaking at Occoquan Regional Park, Sharon Bulova, Chairman, Fairfax County Board of Supervisors, said, "Our contribution in Fairfax County that was put into our budget was a turning point, so to speak, for fundraising. And it was clear that Fairfax County had skin in the game." According to “The Sentinel, the Newsletter of the Turning Point Suffragist Memorial,” Board Chairman Bulova and Supervisor John W. Foust drafted the motion to support the project. "They cited its importance to the county's tourism and hospitality industries and said the memorial will only enhance the interest among residents and tourists to visit a famous historical and cultural area of Fairfax County." The Fairfax County Board unanimously approved the motion of Supervisors.

Sargeant described the suffragist movement as the "Best-Kept Secret in American History." While the seven-decade campaign sought women's economic, social and political gender equality, the effort was not for the faint hearted. In the early years, women organized and built a movement. Then at the turn of the century, they changed tactics for the new generation with a new battle cry.

Women paraded, petitioned and picketed. Few women who began the campaign saw it to fruition. Material distributed at the groundbreaking titled, "SHALL NOT BE DENIED, Women Fight for the Vote,” by the Library of Congress, stated: "Their story is one of courage, perseverance, savvy, creativity and hope that inspires women today.”

According to Wirth, the groundbreaking date coincided precisely one hundred and two years after the infamous Nov. 14, 1917 "Night of Terror.” On that evening scores of suffragists ages, 19-73 were illegally imprisoned and tortured at the nearby historic D.C. prison grounds (what is known as the former Occoquan Workhouse) after peacefully picketing outside the Woodrow Wilson White House for the right to vote. “There, they were humiliated, kept in inhumane conditions, tortured, locked in solitary confinement, and brutalized."

Doris Stevens wrote 'Jailed for Freedom' in 1920. In it, she stated, "When all suffrage controversy has died away, it will be the little army of women with their purple, white and gold banners, going to prison for their political freedom that will be remembered. The challenge of the picket line roused the government out of its half-century sleep of indifference… (On the Night of Terror) I saw Dorothy Day brought in. She is a frail girl. The two men handling her were twisting her arms above her head. Then suddenly, they lifted her up and banged her down over the arm of an iron bench – twice."

Wirth said when word leaked out about the unconscionable treatment; it became a “turning point” in forcing President Wilson to ask Congress to consider a Constitutional Amendment. The site for the Turning Point Suffragist Memorial is located within Occoquan Regional Park and the National Register-listed D.C. Workhouse and Reformatory Historic District, where the Night of Terror occurred.

CONSTRUCTION of the national suffragist memorial is anticipated to take nine months, culminating in the Aug. 26, 2020 dedication ceremony, which is the centennial anniversary certification of the 19th Amendment, Wirth announced in a statement. Designed by R.E. Beach Architects of Falls Church, the memorial, Wirth said would be the cornerstone of a planned park redevelopment. It would commemorate the five million women who fought for seven decades to win ratification of the 19th Amendment to the U.S. Constitution – the right for American women to vote. Wirth said Turning Point Suffragist Memorial would tell a critical part of history about American women through the construction of the memorial and “establishment of the Turning Point Institute and development of a ‘Constitution Trail’ in collaboration with numerous historical sites germane to our ever-evolving Constitution.”

Preceding the program guests spoke out. Nancy Tate, a board member of Turning Point and Woodrow Wilson Visiting Fellow, shared her thoughts about the brave and brilliant suffragists. "I joined the board when I was Executive Director of League of Women Voters, which was founded by Carrie Chapman Catt, leader of the major suffrage movement and who ensured the passage of the Nineteenth Amendment which the memorial is here to honor."

Lois Elizabeth Bingham, Executive Director of Delta Sigma Theta Sorority, Inc., said: "I think at long last women are being recognized. As an African American woman, I am doubly proud because we face the double jeopardy of being black and being women."

Mary Ellen Brock, International President, General Federation of Women's Club, spoke about how dedicated the suffragists were and that they "suffered so much."

Patricia Harrison, Fairfax County representative to NOVA Parks Board, said she was there to support and celebrate the achievements of women. "And to recognize the importance of the women's suffrage movement in creating opportunities for all women who come after us."

Significant donors, national partners and others spoke during the program, among them Tara Hogan Charles, Global Government Relations and Public Policy, Proctor and Gamble. She explained P&G had an aspiration, "to create a world free of bias, with equal voice and equal representation for all individuals, which is why we are humbled to support the construction of the memorial to recognize the decades-long fight for the women's right to vote here in the United States.”

Colleen Shogan, Assistant Deputy Librarian for Collections and Services at the Library of Congress, Vice Chair of the Women's Suffrage Centennial Commission shared how different states had already celebrated the 100th anniversary of the ratification of the 19th Amendment. “They have honored those occasions with commemorative proclamations and resolutions, lighting up state capitals and landmarks in purple and gold and holding celebrations and educational programs throughout the states."

OCCOQUAN REGIONAL PARK is part of NOVA Parks. In a Memorandum of Understanding, NOVA Parks provided the land and perpetual maintenance of the memorial. "NOVA Parks is proud to share its role in the route for this important addition to Occoquan Regional Park,” said Michael Nardolilli, Board member, Chairman, NOVA Parks. “As engaged citizens today, we need to understand the low points, and there were low points suffered by these women that are driven by fear and hatred but at the same time aspire to the high point of unity and love where all of us can strive to be our best. Let this site point to a better future for all Americans with liberty, and justice for all.”

To learn more about the memorial, visit suffagistmemorial.com.