Too short for the teller line, Pepper converses across generations. 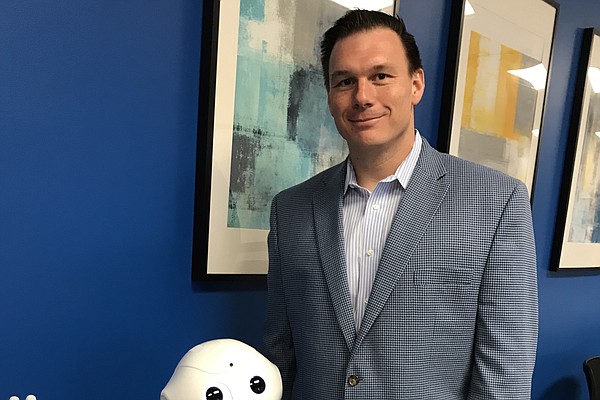 In a multi-person interview/demonstration held at the credit union's headquarters in Herndon, Pepper, created by Softbank Robotics, was not a static robot. She tracked eye contact and expressed emotions. As a member service representative meant to augment the branch, Pepper sought people out. She read their moods and attention levels using facial recognition cues and artificial intelligence.

According to a statement by Northwest Federal, Pepper will be used to assist members, show products and services and teach financial literacy through games and interactions. "She cannot do transactions," qualified Lane. Pepper glanced at Lane, waited for him to stop speaking and added, "I'm too short for the teller line.“ Pepper, who stands about four feet tall, attracts people by looking at them, introducing herself and inquiring if they desire information. She converses easily and answers questions in a voice with natural intonation, stress pattern, loudness variations, pausing and rhythm.

Asked why this voice, Lane said studies found Pepper's voice most appealing to all demographics. He added, "Pepper can speak French, Spanish, Japanese, Chinese and more," and would be set to a given language to match her branch travel schedule. He noted though that all content on her display panel was written in English.

Pepper mimicked human behaviors such as following the multi-person conversation by looking at the person speaking and keeping her focus on that person. With her autonomous blinking, Pepper did not stare but seemed to blink, compliments of LED lights, and looked at people around her. She also demonstrated an awareness of her surroundings and responded to stimuli, such as a touch on her hand.

Pepper answered questions ranging from telling a bit about herself to helping people choose the right product offered by Northwest Federal, and even gave a financial quiz.

"Hi, I'm Pepper," she said. "I'm here to help you learn more about our credit union...You can find me at any of our NWFCU locations." Asked how old she was, Pepper replied,"I'm five. I'm still a little young." She was also more than willing not to talk business. She took selfies; told jokes, played games and danced.

Pepper tried to attract conversation by introducing herself to people closest to her, aware of their proximity. While she waited for one person to interact then disengage, she would glance to another person not speaking, giving that person a moment to jump into the conversation.

During interactions, Pepper and the person chatted both by verbal exchanges and through content entered on her display screen. If the person wanted, Pepper took information and could connect a Northwest Federal representative to follow up. Pepper also knew when to disengage, taking cues from words and the person's motion of moving away.

Lane said that, at the end of the week, they take data from Pepper and aggregate it.

"Data shows people really love her, and they love our credit union through her. There are no other banks in the area I know of that have one … What better way to engage with younger demographics. Bring them into the branch, have a conversation and build a relationship. They are underserved in the community. They can talk with Pepper about financial literacy but then speak with a person afterward. That is the key thing. As much as she is one component, it is the personal relationship that is more important. Pepper is just the introduction."

"We're excited to introduce Pepper to our members and expect it will add value to the service experience at our branches," said Northwest Federal's President and CEO, Jeff Bentley. "We encourage everyone to stop by, meet Pepper and ask a question, or just say hi—Pepper loves taking selfies and showing off dance moves."