Story revolves around Belle and the Beast, a prince under the spell of an enchantress. 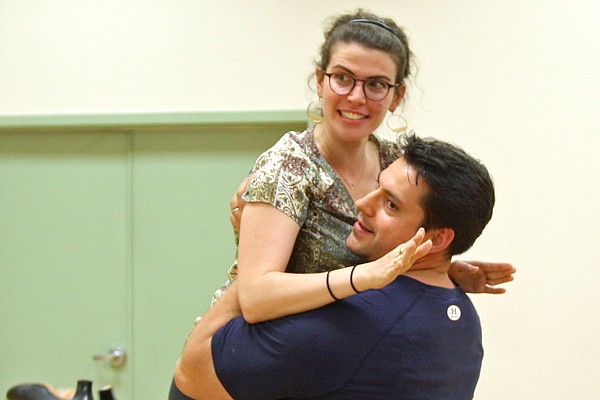 The Arlington Players will present the musical, “Disney’s Beauty and the Beast,” from Sept. 14-29, 2019. The story revolves around Belle, a girl from a provincial town, and the Beast, a young prince under the spell of an enchantress. If the Beast can learn to love and be loved, the curse will end and he will be transformed into his former self.

Director Emily “EJ” Jonas said audiences gravitate toward this famous tale in different ways. “For me, I was pulled into loving this story as a young woman because of Belle. She became a role model with her curiosity, her intelligence, and her bravery. I was eager to tell this story in a new light,” she said.

She continued: “By showing the gears of storytelling through the eyes of children, we see the story come alive. I wanted to produce this play with Belle’s journey at the forefront. Like my connection as a child, I believe ‘Beauty and The Beast’ is a love story like no other. And, for this production we see that unfold through #herStory.”

She said her main goal as director was to showcase how every part of the story is a different gear to the overall tale. “Each element works in its own way to tell of characters, their adventures, choices, and stories. The cogs, gears, and moving set pieces represent our working minds as we follow the journey of these amazing characters,” she said.

Sterling Beard is playing the main role of the Beast – the master of the castle who’s used to his orders being followed without question by a staff of servants who care for him even though they fear him. “But his biggest challenge for love is learning that he's worthy of it no matter how badly he has messed things up. He's his own biggest obstacle,” he said.

He added: “The Beast carries a lot of the emotional weight of the show; it's a role that has funny moments, but they're outweighed by the tenderness he develops with Belle. And the physicality is on another level entirely; it's not the marathon that our dance corps deals with every night, but trying to be subtle while remaining a large presence on stage has been a real challenge.”

“My natural instinct is to go big or go home; and why wouldn't you go big with Beast? He roars, he growls, he stomps, he argues. But he has to open up. Our director, EJ, has been doing a great job pulling me back and getting me to play things more subtly. Altogether, it's the most challenging role I've taken on in a good, long while – maybe ever,” he said.

Robin Weiner is playing the role of Belle, a brilliant young woman who is misunderstood and unappreciated by the members of her small, provincial town.

“While she often gets written off by others as nothing more than a pretty face, it is her spirit that encompasses the fullness of her beauty. She has a curious nature, a passion for reading, and a desire to make the most of what life has to offer. She is selfless, for the way she gives up her freedom to protect her father, she is assertive, in the way that she stands up to the Beast's mistreatment, and above all else, she is strong,” she said.

As far as challenges, she said: “Belle is onstage for the majority of the show, so playing her certainly has been a test on my endurance and my memory. From blocking, to music, to choreography, to stage combat, it is a lot to keep track of all at once, but what has gotten me through it has been the guidance of the production team and the support of my cast. Also practice. Lots and lots of practice.”

Rachael Fine is playing the role of Lefou, who is Gaston’s “dim-witted hanger-on.” She said: “I like to think Lefou has a bit more depth and, although clearly the Gretchen Weiners apprentice to Gaston’s Regina George, has a heart, a conscience, and loyal devotion to Gaston. Plus, Lefou adds some pretty fun comedic elements.”

She added: “I love that Disney has given the opportunity to make Lefou a ‘pants’ role! That being said, it has made it difficult to determine Lefou’s motivations without making each line delivery and motivation overtly girly. It has been fun playing around in Lefou’s head to figure out the ‘why?’ behind each line, song, movement, etc. Our director EJ guided me in creating an interesting backstory to explain how Lefou came to be Gaston’s apprentice – it’s been a very fun process to bring layers to a typically one-dimensional character.”

Anna Marquardt is playing the role of Mrs. Potts, the teapot. “I'm not quite as old as Dame Angela Lansbury was when she played the role, so I think I bring a different – I won't say ‘youthful’ but maybe ‘youth-adjacent’ – energy to it, while still being a mother to not only Chip, but basically everyone else in the castle, including Belle,” she said.

She added: “All the roles in this show are iconic, but this was ‘ANGELA FREAKING LANSBURY’ in the original animated film, so like…full icon status, right there. I have seen the film a lot of times, so I wanted to make sure to make the character distinct, while still being true to the story.”

Performances of “Disney’s Beauty and the Beast” are set for weekends, Sept. 14-29 at the Thomas Jefferson Community Theatre, 125 S. Old Glebe Road, Arlington, VA 22204. Friday and Saturday evening performances begin at 8 p.m.; Sunday matinees begin at 3 p.m. Special performance September 21 at 2 p.m. The Sept. 21 performance at 8 p.m. will be ASL interpreted. Prices range from $15 for children/students and $22 for seniors/military to $25 for adults. For more information, visit www.thearlingtonplayers.org.

“Disney’s Beauty and the Beast,” weekends, Sept. 14-29 at the Thomas Jefferson Community Theatre, 125 S. Old Glebe Road, Arlington, VA 22204. Friday and Saturday evening performances begin at 8 p.m.; Sunday matinees begin at 3 p.m. Special performance Sept. 21 at 2 p.m. The Sept. 21 performance at 8 p.m. will be ASL interpreted. $15 for children/students and $22 for seniors/military to $25 for adults.