“The way to democratize access was to start with children.” 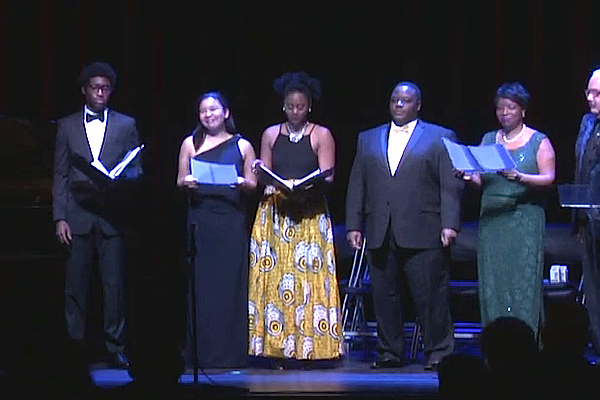 Opera NOVA performed at the Kennedy Center Millennium Theatre on Feb. 22 as one of their three Black History Month performances.

“It was so exciting for us.” Miriam Miller, the long-time champion of Arlington opera, says she thought “maybe if we do this enough like the Europeans, people will judge the voice instead of the skin.”

Miller explains that since its inception in 1962 as Opera Theatre of Northern Virginia at the time, Opera NOVA has “democratized access to all of its events—not just a certain class or race or demographic, not just intellectuals but everybody.” As part of this effort to reach everyone, the opera has also organized their casts to include an all African-American cast concert as well as Latino, Asian and Russian concerts.

“I have been interested for a long time in doing something positive to fight segregation. I don’t know why. A long time ago, I found Mattiwalda Dobbs, who was opera royalty, living in Arlington. I had the idea of finding outstanding Black people we don’t know anything about and bringing them out to be seen.

“I told my idea to Elyse Jenkins, one of the top African sopranos. The way I conceived it was to mix past and present, to flesh out landmark people like Marion Anderson and Coretta Scott King, who many people don’t know sang opera.”

Larry King, the narrator for the Millennium concert said, “I think the reason I was chosen for narrator is that I had met all three of the honorees and had something personal to say about them. I met Leontine Price when she came along with my kindergarten teacher’s family to Thanksgiving dinner at our house one year. Someone asked her to sing and when she was finished someone said, “you will hear more from her someday.

King says the program at the Millennium weaved the stories of the honorees with the performers with the theme of past and present. He says Opera NOVA approached the Kennedy Center because they wanted more people exposed to Black opera singers. “The audience was so moved; they hadn’t known what to expect and they stayed around for a long time afterwards. They said they hadn’t seen anything like this.”

Miller says, “We had 255 in the audience. I can’t tell you what it meant to me. I was sitting in the front row and when I turned around I couldn't believe it.”

Elise Jenkins says she was not only a performer that evening but organized the performers and the program for the evening. “Now I can say I was a soloist at the Kennedy Center.” Jenkins put together the program by meeting the performers on social media, then face-to-face and getting recommendations from colleagues and friends on specific genres.

“African-American is still considered a minority genre and we wanted it to be a showcase for the talent we have.” She said at the end of the concert they asked the audience to join them in singing the first verse of the National Black anthem [Lift Every Voice and Sing] and when it was finished the audience remained standing.”

Opera NOVA began as Opera Theatre of Northern Virginia (OTNV). It was the first opera in Virginia and today is the Arlington is the smallest entity in the U.S. to have its own opera company. OTNV closed in 2011 and was restructured as Opera NOVA, which is a volunteer non-profit organization.

Miller says she got interested in the early 70s when her daughter was singing in the Washington Opera and she was still a working mother. Miller asked what she could do to help and in 1973 ended up establishing an Opera Guild and taking over marketing and promoting for Opera Theatre of Northern Virginia.

“Everything was about integration in the 60s and 70s and we thought the only way to democratize access was to start with children.” So they met with the Chairman of the Arlington County Board and the Superintendent of Schools and have been following that concept ever since.

Now they hold four children’s concerts a year reaching 3,000 school children in an opera designed just for them. They hold these concerts in Thomas Jefferson Community Center, which holds 700 in its auditorium and has an orchestra pit. “Many of these children have never seen an orchestra pit.”

Miller says children bus in from all over including students from public, private, parochial and home-schools. This year’s production was the bilingual one act classic “Monkey See, Monkey Do,” performed in February. Since Opera NOVA believes in education through entertainment, a study guide relevant to the opera detailing the story line, author of the opera and the cast, accompanies each opera.

This allows the teacher to incorporate the opera into the school lessons. One teacher commented she had been hesitant to take her students the first year but has now been back four years in a row.

One of her students commented that someone in the cast “looked just like them.”

In addition, Opera NOVA has expanded its performances to include special concerts for seniors as well as their regular performances for the public.