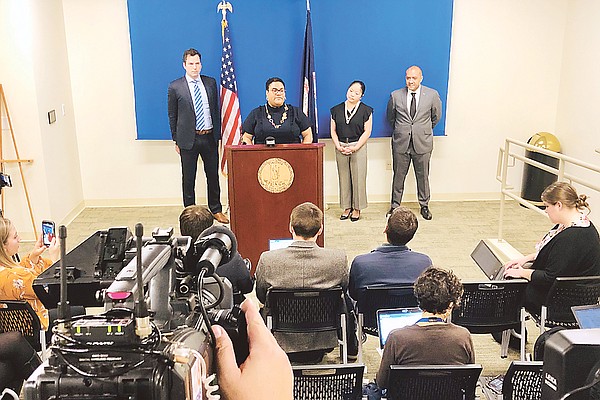 Virginia has a horrible history with racial gerrymandering.

It started with the ratification of the Constitution, an effort led by Virginians who wanted to count slaves as three-fifths of a person so representation in the south wouldn’t suffer because so many of its inhabitants were non-voting enslaved people. It continued all the way to 2011, when the Republican leaders engaged in a scheme of packing black voters into House districts to dilute their influence elsewhere, a plan the United States Supreme Court later determined was unconstitutional. Now members of the Legislative Black Caucus are worried a proposed amendment might enshrine racial gerrymandering into the Virginia Constitution.

“We have great concerns about having African-American representation in the room for redistricting,” said Del. Lamont Bagby (D-74), chairman of the Legislative Black Caucus, when the amendment was first proposed last year. “This doesn’t guarantee that.”

Now Democrats are in a bind. They overlooked concerns of the Legislative Black Caucus last year, striking a deal with Republicans to support a constitutional amendment that creates a bi-partisan commission to draw legislative districts. Then they campaigned on the issue and won majorities in the House and Senate.

Now the politics have shifted, and members of the Legislative Black Caucus are leading the fight to defeat the amendment. They argue that the language of the amendment says membership of the mapmaking commission should “consider” race rather than requiring racial diversity. House leadership may end the General Assembly session this year without even bringing the amendment to the floor for a vote, opting instead to create an advisory panel that would make recommendations lawmakers would be free to ignore.

“It’s disgraceful. These folks ran on the issue,” said Sen. Mark Obenshain (R-26). "They told people across the commonwealth of Virginia that they supported the Constitutional amendment. They got elected on the basis of supporting it, and if they turn their backs on their constituents there’s going to be a price to pay.”

THE POLITICS OF REDISTRICTING have been a bugaboo in Virginia politics since the creation of the House of Burgesses in 1619, when 22 members represented four cities and five slave plantations. Two centuries later, members of the House of Delegates are still trying to draw the line between urban and rural, although these days the technology of mapmaking can fine tune the art of packing and cracking — gerrymandering districts with scientific precision. That’s one of the reasons groups like Virginia 2021 was created, to take that power out of the hands of the party in power and instead put it into a 16-member commission composed of eight lawmakers and eight citizens.

The bipartisan compromise was struck in the closing days of the 2019 General Assembly session, an agreement that was negotiated in a secret closed-door conference committee. Those negotiations took place out of the glare of public scrutiny, and the lack of transparency didn’t help the process. One provision that emerged out of that conference committee was a feature that was not in the House version or the Senate version, the ability of the Republican-led Virginia Supreme Court to step in and make a final determination. If Republicans decide they want to object to the commission’s maps, they can shift responsibility for mapmaking to the Republican-led court.

“I can’t trust judges to be fair on the basis of the facts and the law anymore,” says Del. Mark Levine (D-45). “Those days, if they ever existed, they’re certainly gone now.”

Levine and other critics of the amendment are supporting a bill introduced by Del. Cia Price (D-95) that would create an advisory panel to suggest legislative districts to the General Assembly. Its basic structure is almost identical to the commission outlined in the amendment, but there’s an important distinction. Racial diversity on the panel of mapmakers would be required, a stipulation that’s not in the language of the amendment. Price announced her bill at a press conference the first week of session.

SUPPORTERS OF THE amendment are still trying to salvage the process. They argue enabling legislation for the amendment can solve some of the flaws. For example, they say, a special master can be appointed to keep mapmaking out of the hands of the Republican-dominated Supreme Court. And the language of the amendment does call for consideration of racial diversity, even if it’s not a requirement. Furthermore, they say, Price’s bill does not take power to draw maps out of the hands of lawmakers. Instead it creates an advisory panel that would make suggestions lawmakers would be free to ignore.

“Because the enabling legislation can tell the commission how to operate and it can tell a court who gets it how to operate. But a stand-alone bill can’t tell the legislature how to operate,” says Cannon, leader of the advocacy group pushing the amendment. "The legislature could amend a map at any time, and this is what we would be changing in ours.”

Critics of the amendment say it’s simply too flawed a proposal to be enshrined into the Constitution. They worry about racial diversity on the commission, and they are concerned Republicans might exploit the rules to have the GOP-dominated Supreme Court draw maps to benefit Republicans. For now, Democrats are leaving the door open to considering the amendment, but it’s telling that it has not yet come to the House floor for a vote. Democratic leadership has until the end of the session to make that happen, but House leaders don’t seem to be in much of a hurry to make that happen.

“I don’t know if it’s on the calendar,” said House Majority Whip Alfonso Lopez (D-49) when asked if the House would vote on the amendment.