Commonwealth’s Attorneys from Alexandria, Arlington and Fairfax join forces to press for reform. 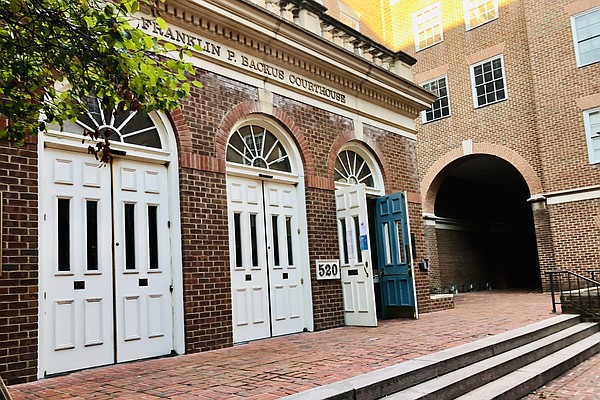 Democrats ended the General Assembly session earlier this year having failed to achieve their campaign promises on criminal justice reform. Aside from decriminalizing marijuana, the rest of the agenda was a bust. Mandatory minimum sentences remain on the books. People convicted of marijuana possession are still unable to expunge their records. Commonwealth’s attorney's still can’t set aside prosecutions for defendants who deserve a second chance.

“We found ourselves at loggerheads with the Virginia Association of Commonwealth's Attorneys,” said state Sen. Scott Surovell (D-36). “As we proposed some of these new ideas we found some support from some new people who were elected.”

Enter the Progressive Prosecutors for Justice, the newly created group that includes Commonwealth’s Attorneys from Alexandria, Arlington and Fairfax as well as eight other jurisdictions. As lawmakers prepare to return to Richmond for a special session on criminal justice reform, this group of likeminded prosecutors will be pushing for a package of bills that does not have the backing of the Virginia Association of Commonwealth’s Attorneys.

“I think they realized that 11 likeminded people can come to a decision a lot quicker and more in line with their thinking than 120 individual elected people,” said Fluvanna Commonwealth's Attorney Jeff Haislip, president of the Virginia Association of Commonwealth’s Attorneys. "I don’t think it’s a sleight at VACA. I think they have a like mind on these issues, and they want to make sure they’re heard.”

CLEARING THE RECORD of old criminal charges was one of the issues that caused friction between Senate Democrats and House Democrats. Some of the cases were easy, like expunging the record of misdemeanor drug convictions. Others proved more challenging, like proving that someone was a victim of sex trafficking in an effort to expunge the record. Ultimately, lawmakers decided to study the issue more and left town without taking action. Now it’s at the top of the agenda for the Progressive Prosecutors for Justice.

“You could still have a situation in which there is still some record maintained somewhere by the courts,” said Alexandria Commonwealth’s Attorney Bryan Porter. “But their public criminal record would be expunged or sealed so they don’t have barriers to education, barriers to employment or barriers to housing.”

House and Senate Democrats remain divided on how to approach the issue. House Democrats are focused on a system of automatic expungements for certain crimes, preventing defendants from jumping through a series of hoops to clear their record after five years. Senate Democrats want to make sure judges are able to exercise discretion, potentially preventing sex offenders from having their records unnecessarily cleared. With the special session only a few weeks away, Democrats remained divided on the best solution.

“I wouldn’t want the perfect solution to be the enemy of the good,” said Porter. “If we can find a way to allow people who have faithfully discharged whatever sentence they have received for an offense and have become contributing members of society, it seems to me there ought be a way for them to have their records officially cleared.”

DEFERRED DISPOSITION might sound like a wonky reform effort, but it’s probably one of the most simple and easily understood proposals on the legislative agenda for the progressive prosecutors. Essentially, the idea is that courts are able to set aside convictions for defendants who deserve a second chance. In a technical sense, the disposition of the cases is deferred until the defendant is able to successfully complete a probationary period. In a practical sense, it’s a way for people who have made stupid mistakes to get back on track.

“That proposal is a clear message to judges that they have the authority to delay imposing a conviction in order to give a person a chance to mitigate the harm that they’ve done,” said Arlington Commonwealth’s Attorney Parisa Dehghani-Tafti. “It’s a way for us to push pause and offer real opportunities for rehabilitation and fairness.”

Currently, judges are able to defer disposition in cases involving possession of drugs or trespass. Earlier this year, a bill by Del. Mike Mullin (D-93) and Sen. Creigh Deeds (D-25) added shoplifting to that list. Senate Democrats are pressing for a change to the law that would do away with the limited number of crimes where defendants could get deferred distortion. If the proposal makes it out of the special session, defendants could work with judges to set aside charges for crimes like reckless driving, assault and drunk driving.

“Not every social ill should be a crime,” said Dehghani-Tafti. “Not every crime should result in punishment that involves incarceration, and not every punishment should be so long and so onerous that it leaves no room for rehabilitation.”

SOMETIMES JUDGES PUSH BACK against prosecutors who want to dismiss charges. In the last year, that’s happened in courtrooms in Arlington and Norfolk, where judges rejected efforts by prosecutors to set aside misdemeanor drug charges. That’s led to some frustration among Commonwealth’s Attorneys, who are elected by voters rather than appointed to their position like judges. One of the items on the legislative agenda for the Progressive Prosecutors for Justice is for the General Assembly to clarify what kind of discretion they can exercise in the courtroom.

“The only actor in the criminal justice system that is directly accountable to the people, the Commonwealth’s Attorney, had the duty to bring the values of the community into the courthouse,” said Fairfax County Commonwealth’s Attorney Steve Descano, who also clashed with judges after his election last year. “The way that we do that is through our prosecutorial discretion in terms of how we deal with cases that come across our desks.”

Sometimes tension between prosecutors and judges happen when Commonwealth’s Attorneys change their approach. That’s what happened in Norfolk, where Commonwealth’s Attorney Greg Underwood decided to stop prosecuting misdemeanor marijuana possession charges and the circuit court bench announced they wouldn’t be going along with the program. Tensions have also been high in Arlington, where judges demanded written explanations for each individual charge Dehghani-Tafti wanted to set aside. Descano says that kind of behavior undermines a bedrock principle of justice.

“Over the last few years, as more and more communities have elected reform-minded prosecutors, we’re seeing more and more judges around the state ignore that and look for loopholes in the law to try to thwart their Commonwealth’s Attorneys and therefore thwart the will of the people,” said Descano.