Pop-up grocery moves from Christ Church to Personal Delivery Services with daily food deliveries to people falling between the cracks. 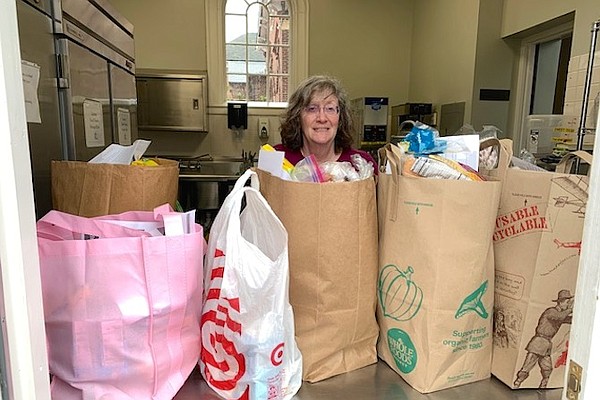 Part 1 of a series on food insecurity in Alexandria during the coronavirus. Link to Part 2.

The regular Thursday morning pop-up grocery at Historic Christ Church has been closed for the last three months and transformed into a delivery service. The pop-up grocery served more than 30 families in need each week.

The church has kept the Lazarus Food Pantry (pop-up grocery) running “but in drastically modified ways,” according to Barbara Fallon who is the volunteer coordinator of this effort, now run out of a staff member’s home and the Methodist Church across the street. “We are reaching those in tremendous need who are falling between the cracks from some of the other major City food efforts,” Fallon says.

In February they were hearing about the coronavirus but the pantry kept going. “We had an arrangement with Marymount nurses, and Pamela came with music and meditation yoga for people waiting for the pop-up pantry to open.” Fallon says the last two weeks they moved the pantry outdoors for the first time.

“March 12 was very chilly. We set up a long line of tables for safety’s sake and 40 chairs. We had hand sanitizers.” The next week the health situation was getting more serious, so instead of clients having the usual shopper experience, the volunteers prepackaged grocery bags for the first time ever and served them from the Meade Room kitchen at the church. “We had to be quick.”

Fallon says they prepackaged 90 bags of food. ”People were starting to get nervous. Fifty came out the final day and got fresh vegetables, eggs, frozen meats. We were as generous as possible. We had 35 extra grocery sacks, thank goodness, because the calls kept coming in for food.” Some people walking by on the street who saw the line of people said they didn’t know they offered the food, “and we reached additional people in need that way.”

At the last two pantries they took the phone numbers of those who wanted to participate so they could send a group text to the clients telling them what to expect in the future, and about other food resources such as the ALIVE! Free giveaway and Hunger Free Alexandria.

Fallon says she delivers to people who are really in dire need. “For instance, 87-year-old Magna, who has a room in a Del Ray house. She hadn’t been out for a month, and she had no food. I text her that I’m coming. I leave the food in her front yard and wave. She must cook because she loves the fresh produce.”

Fallon says, “Most of the people are families with kids. I delivered to a Spanish single mother with a darling first grader who translated for her.” Fallon said she had gotten the call asking her to make another delivery the same day for this family’s emergency. “They had no food.” She said when the mother got the sacks of groceries she could say only one English word with a smile— “Happy.”

Melanie Gray, Director of Outreach and Mission at Christ Church, says the former pop-up grocery volunteers now sack up groceries. “The network of volunteers I created years ago is able to work now. It took a while to pull it together to make it work, but once it’s working, it works really well.” The food pantry volunteers do the shopping and another group of go-getters deliver the groceries every day.

There was a lull of a few weeks and “we wondered how we were going to regroup.” Gray set up a Care Team of volunteers who called 200 people in the Christ Church records to check in and see if they needed food. Fallon says a lot of these people are sequestered and don’t have the internet or any way to find out about the resources the City offers. “A lot is by word of mouth.”

“But we were getting all of these calls—what are we going to do?” The church building was closed. That’s when Liz Denson, Gray’s Assistant at Christ Church, offered her home as a storage place. Denson says she had all the groceries and other supplies in her living room but eventually there was too much. So she approached the Methodist Church across the street that offered their refrigerator and storage space.

Today Denson, with a couple of Methodist church volunteers, will load up bags for deliveries and carry them across the street to her home where Christ Church volunteers will pick them up for delivery. “I try to recruit the help of my 10-year-old son to carry the bags and the 8-year-old and three-year-old help in small ways. I make it a point to talk about what I am doing so they understand what is happening in the City.”

Denson pulls out her handy spreadsheet by zip code to cluster the daily deliveries. She has a list for each client. “We ask what they need. They mostly all get the same food but today one single mom with two kids has requested paper towels, dish soap, toothpaste, baby wipes. We give them what we have.”

Denson put out the word to volunteers to drop off groceries at her house. Fallon says volunteers bought food with their own funds. They got a couple of grants to provide Giant gift cards and ALIVE! generously provided Denson with a lot of food. In addition, gleaning will begin at the Farmer’s Market, which will add fresh produce to their supplies. Fallon says originally it was food, food, food. But now they have been able to add diapers and toiletries. “And now we’re adding crayons and coloring books.”

Gray says they have learned as they go along and “we make corrections. The families asked for more masa flour, rice, snacks for the kids, cups of noodles, laundry detergent, trash bags, very specific things.” And the airlines repackaged their snacks and provided packages of pretzels and things “which the kids loved.”

Lazarus Counselors at Christ Church helps residents in the City in crisis situations by addressing the immediate needs. Gray says since March 19, Lazarus Counselors have taken 462 calls and spent over $119,000 on 339 client bills and 128 gift cards and groceries. Gray explains the church’s Lazarus ministry reaches out with financial counseling and support for people facing financial emergencies as well as offering a shop and share assistance through the pop-up grocery. They have spent $14,630.15 on groceries for 128 families, including 475 people with 54 receiving groceries and 109 receiving gift cards.

In addition to food, the Lazarus ministry has been able to give people $250 to pay a portion of their rent. Even so, “This is like putting a bandaid on a cancer.” But, Gray says, “People are so grateful for something; they want to be heard. It shows the system is working.”

Gray adds “starting today the ACT fund has been set up to help City of Alexandria employees making under $60,000.” Lazarus has a phone call for intake and a City employee can go online and start the application. “We plan to get back within 48 hours. Nobody needs to know you need money. It can be used for gas, food, whatever you need.”

These efforts are funded through a cooperative effort from six churches, grants from United Way, FEMA, and ACT for Alexandria as well as over $75,000 from 198 individuals.