Use of Force Rises in 2019 in Fairfax County

Disproportionate treatment of African Americans on the rise, too. 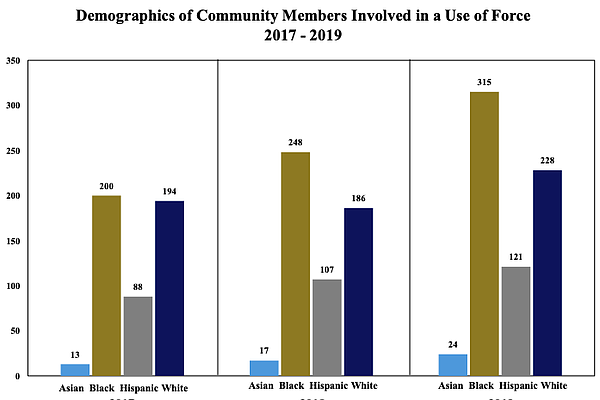 Incidents of police use of force rose from 510 incidents in 2018 to 594 in 2019. Fairfax County Police released its published data on Monday, June 22.

In the McLean district, where African American community members account for fewer than one in 20 (4.69 percent), they were the subject of police force 57.02 percent of the time.

A pointed firearm accounted for 396 of the 1,632 times use of force was used (multiple kinds of force were used in the 594 cases), force to hold in 255 incidents, take down 229 times, and force to cuff 206 times. Use of force includes use of weapons, use of pepper spray, strikes with hands or feet, taser weapons, and more.

The implemented recommendations of the Ad Hoc Police Practices Review Commission, to which FCPD leadership agreed, call for collection and release of more detailed data than has been made available: “Collect data, and publish an annual statistical report, covering all stops, frisks, citations, arrests, and use-of force by district station and magisterial district - include the race, gender, and ethnicity of the individual involved and note whether the suspect is homeless and/or if a mental health crisis is a factor. Document the outcome of each incident and regularly report the collected data to the BOS and the public and post the data online.”