Craig Bradley publishes first in a series of children’s books. 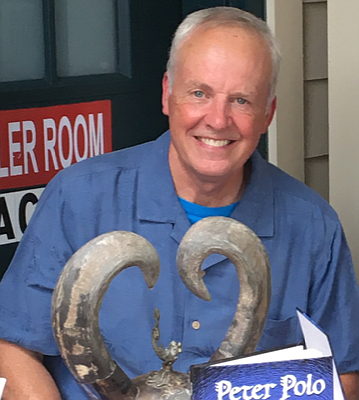 Craig Bradley’s travels have taken him to five continents. After exploring much of the world, the Vienna author shares a glimpse of his experiences through his first book, “Peter Polo and the Snow Beast of Hunza.”

The children’s novel centers around Peter, the younger brother of world explorer, Marco Polo, as he embarks on his own adventure for the first time. When Kublai Khan sends Peter and his two friends to Hunza, a far-away valley in what is present-day Pakistan, they must discover what is causing the region’s beloved snow leopards to disappear. In addition to the many dangers Peter encounters on his journey, he also grapples with following in his famous brother’s footsteps.

Bradley said the idea for the story was inspired by his two sons and the brotherly dynamic they share.

“A lot of times the younger sibling looks up to the older one and there’s a little bit of sibling rivalry, so you see a little bit of that throughout the book,” he said.

THE BOOK transports readers to 13th century Asia, a time when Mirs and Khans ruled over territories across the vast continent. Bradley said he enjoyed writing about a different part of the world and showcasing its unique culture.

“I thought it would be fun to try to bring that to life, and then to go back in time as well, to a time when people had to travel on horses and there weren’t the modern conveniences that we take for granted now,” he said.

Bradley said it had always been a dream of his to write novels. His interest in writing historical fiction stemmed from his own affinity for the genre, which his childhood teachers often shared with him in school. He’s written numerous journal entries and short stories, but “Peter Polo” is his first published piece.

Bradley’s work as an author was also influenced by his experience growing up abroad. As a child he lived in Laos and South Korea.

“I think being exposed to different cultures stoked my imagination, made me realize that there are so many interesting stories and places in the world that maybe folks are not aware of or don’t have the ability to experience firsthand,” he said.

Bradley wrote “Peter Polo and the Snowbeast of Hunza” in 2004 and 2005 after returning from working overseas for 15 years. In 2018, he decided to submit the story to a publisher, and the book was released in April 2020. Bradley said he was relieved to finally see his work reach its end point.

“It’s like anything that you work on for a long time, you’re so happy when it’s done and to see it actually in print is just a good feeling,” he said.

SINCE THE BOOK’S RELEASE, Bradley said he has been enjoying the support of the local community through sponsored events and signings.

“There are so many nationalities and cultures here that I thought this would be a great area to write a book that would maybe appeal to people that like to explore other cultures and learn about other parts of the world,” he said.

Bradley said he hopes the book also gets kids more interested in learning history. He has already submitted his next book in hopes that it will be published in the near future. “Peter Polo and the White Elephant of Lan Xang” is a continuation of Peter’s story as he is sent on a new mission to Southeast Asia.

“I was kind of working my way through the places I’ve lived in Asia,” said Bradley, adding that if things go well, we can look forward to books set in Laos and Thailand, as well as South Korea.