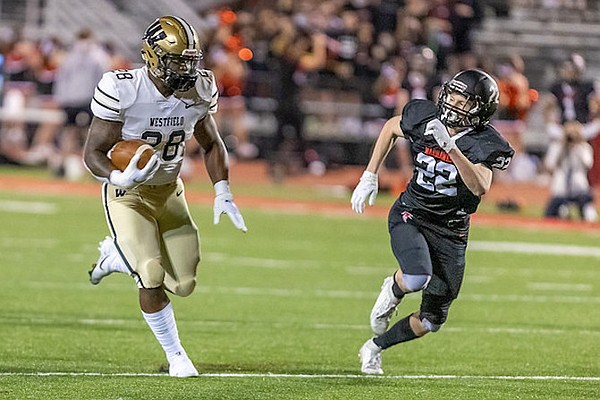 The Westfield Bulldogs traveled to Vienna for a conference football game with the Madison Warhawks on March 12. Early in the first quarter Mikal Legall would run in from 2 yards out to give Westfield a 7-0 advantage. Later in the second quarter, Westfield would take a 14-0 advantage when quarterback Toviel Jung ran in from 7 yards on a quarterback keeper. However 6 minutes later Madison would get on the board when Connor Sevy kicked a field goal. With Madison trailing 14-3 and Westfield driving on the ensuing series, Westfield QB Toviel Jung was intercepted by Justin Williams after Jung’s pass was tipped at the line of scrimmage and Williams would take the ball 65 yards for a Warhawks score with 2:34 to play in the first half. After a scoreless third quarter Connor Sevy would kick his second field goal of the game pulling Madison to within a point, 14-13 with 8:28 to play in the game. Madison QB Connor Barry would score from 1 yard out with 1:35 to play in the game. Madison would opt for a two point conversion which was successful and the Warhawks would hold on for a 21-14 win, the school’s first against Westfield in school history.