Downtown development continues to be delayed. 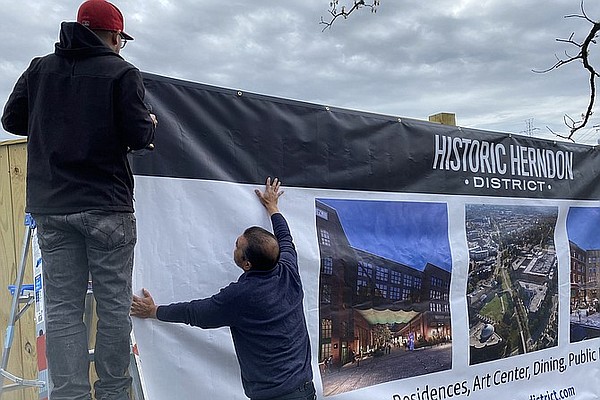 In the Town of Herndon, all key milestones, regulatory approvals, and transfer of town-owned property to their development partner, Comstock Herndon Venture LC, are completed for the long-sought capital improvement project, the Downtown Redevelopment, according to Supervisor John W. Foust, (D-Dranesville District).

The COVID-19 pandemic, however, impacts the construction and delivery of the project, he says, with “substantial increases in material costs and workforce restrictions which have led to project cost increases.”

“The Town of Herndon has approved additional investments totaling $5 million to help ensure the project completion. That increased contribution brings the Town’s total project contribution to $17,850,000,” said Foust during the presentation of his Board Matter, “Economic D 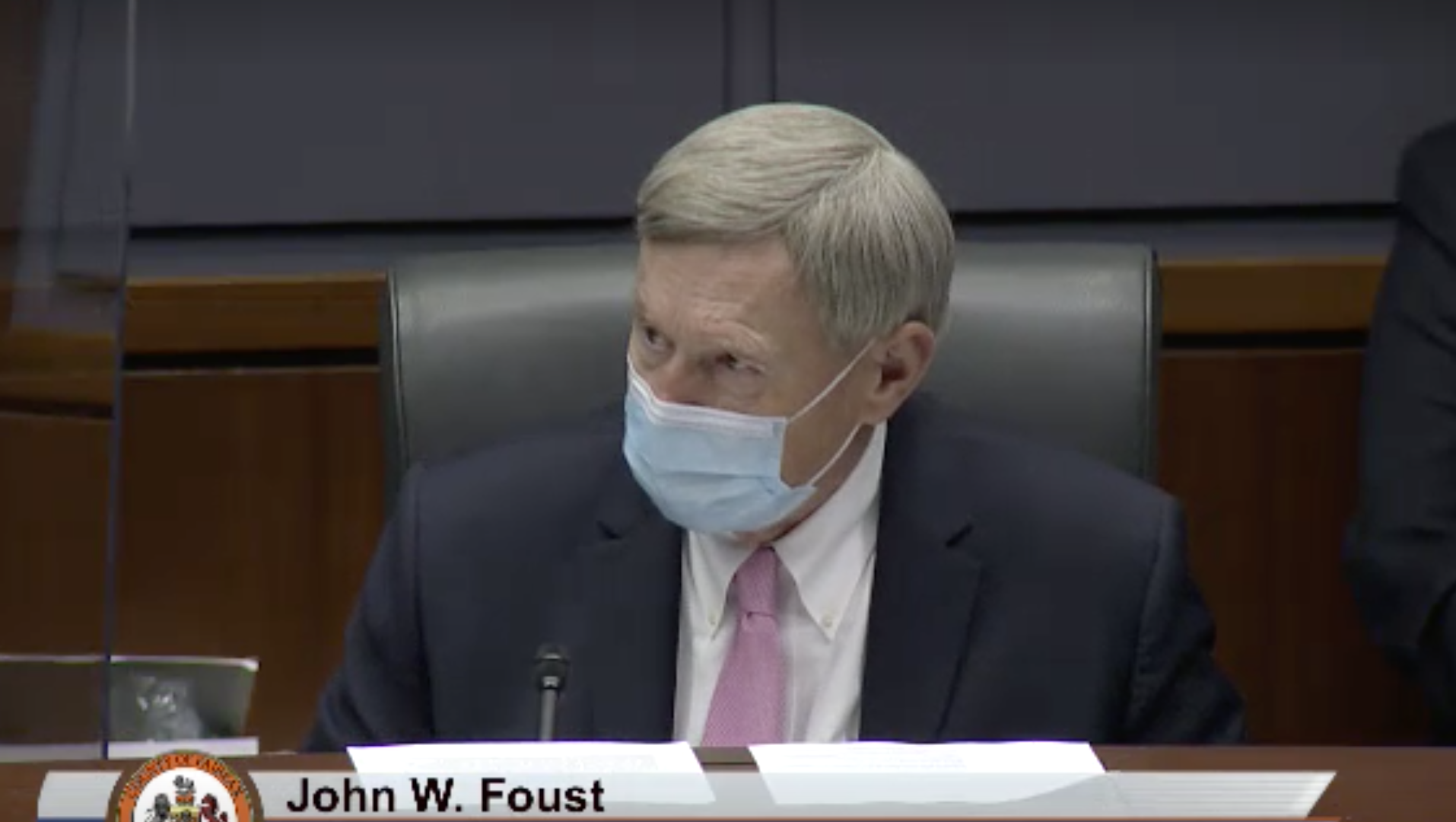 Supervisor John W. Foust (D-Dranesville District) Fairfax County Board of Supervisors presents his Board Matter, Economic Development Support Fund-Herndon Downtown Redevelopment Project at the Oct. 5, 2021, meeting of the Board. evelopment Support Fund-Herndon Downtown Redevelopment Project to the Board of Supervisors during its Oct. 5 meeting. “The Town has requested a similar increase of $5 million in project funding support from Fairfax County,” he said.

Foust moved that the Board direct the County Executive to prepare an Initial Project Evaluation to review the Herndon Downtown project under the guidelines adopted for the Economic Opportunity Reserve. Foust said that the review should evaluate the additional $5 million contribution to this capital project and “the impacts such an investment would make in furthering the County’s goals in areas of strategic importance.”

Foust added to direct the County Executive that “no additional investment from the Economic Opportunity Reserve be made to the Herndon Downtown project unless and until the Board has approved the use of the funds for that purpose.” The Board of Supervisors unanimously approved the motion.

The Town of Herndon is located within the Dranesville District. During his Board matter presentation, Foust said that in 2018, the Fairfax County Board of Supervisors approved the Town request for $1.2 million from the Economic Opportunity Reserve for use towards capital construction costs as part of the Herndon Downtown Redevelopment Project. “Due primarily to delayed project commencement, no funds have been spent from that allocation to date,” he said.

The Town of Herndon’s capital project is one of many projects throughout the County approved for contributions through the Economic Opportunity Reserve. Total project estimates include but are not limited to: Annandale Pilot Projects $124,565; Connected Autonomous Vehicle Demo-$50,000; Springfield Gateway Projects-$100,000; Town of Vienna-Economic Development Study-$50,000, Tysons Partnership-Branding-$1M  and Microloan Program-$2.5M, according to Fairfax County’s Summary of Economic Opportunity Projects.

If, after evaluation, the Supervisors approve the $5 million contribution, along with the previously approved $1.2 million, the total expenditures for the Downtown Herndon Redevelopment capital project will be the highest expenditures from the Economic Opportunity Reserve Fund at $6.2 million.

A spokesperson for the Town of Herndon said that the Town’s requests for funds follow Town Council action in November 2020 to adopt the amendment to the Comprehensive Agreement with Comstock. It included reference to the Town and Comstock’s joint effort to secure economic development incentive(s) from the County.

During Foust’s presentation of the Board Matter, he told how the Town of Herndon had “aggressively pursued economic development through revitalization of its historic downtown area, with a focus on arts and art venues.” He said that the Town created the Herndon Arts District, which will provide tax incentives and regulatory flexibility for properties located in the district.

He said the redevelopment would anchor the arts and entertainment hub in the Town’s downtown, generating revenue for surrounding businesses.

“Land that was public-owned will be returned to the tax rolls, providing significant financial benefits to the County and, to a lesser extent, to the Town,” Foust said.

William “Bill” Ashton is the town manager of the Town of Herndon. He said that the  request for $5 million “was based on additional funds that the town is contributing as part of the amendment to the Comp agreement.” He clarified that the pending grant request is for an additional $5 million, separate from the previous grant approved for $1.2 million. 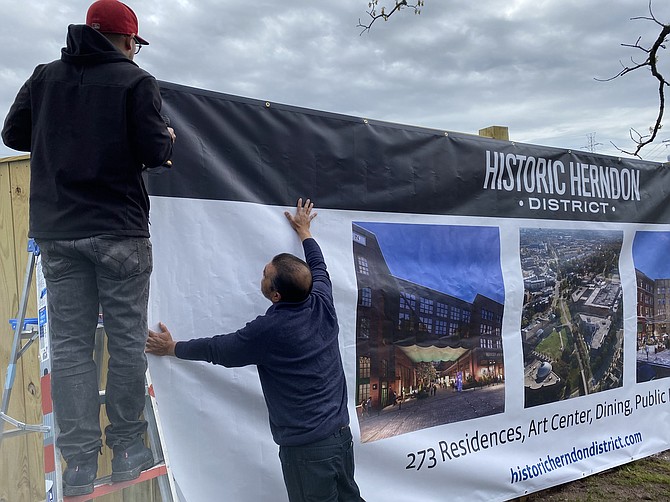 A large banner goes up on the fencing that surrounds the 4.7 acres in downtown Herndon announcing, “Excitement Builds.” Then the pandemic rages and the price of materials rises with tighter supplies.

Asked if the $5 million was designated for the arts center to build out the interior of its shell, Ashton said, “No.”

“The $5 million grant request is for the overall project, due to an increase in constructions costs.” Asked if the Town must allocate funds itself to build out the arts center for use and if these funds are budgeted and approved, Ashton said, “The town has not allocated any funds; the costs are to be determined.” Without funds allocated, the arts center would not be usable. Its interior would be unfinished.

Sheila Olem, mayor of the Town of Herndon, said, “The town is committed to moving forward with Comstock in bringing this exciting redevelopment project to life in Herndon’s downtown.”

Looking ahead, Comstock is poised to announce its next step sometime in the next 11 weeks. At the Nov. 17, 2020, public hearing, the Herndon Town Council unanimously approved the resolution that amended the Comprehensive Agreement with Comstock to advance the project. It established a date by which Comstock must have the project under construction, to Dec. 31, 2021. According to Item 7, Extension of Outside Satisfaction Date; Market Pause: “Comstock shall have the right at any time prior to Dec. 31, 2021, by delivery of written notice to Herndon to delay the Outside Satisfaction Date up to twenty-four months.”