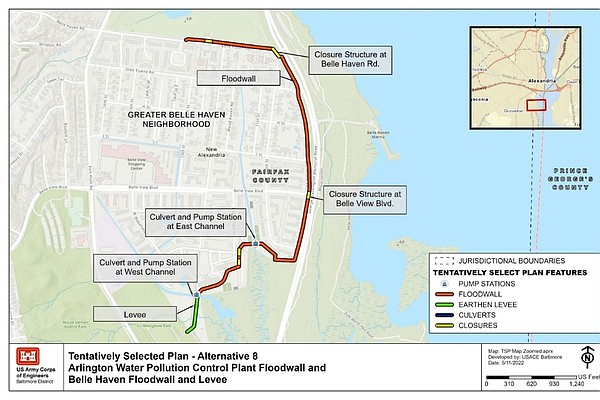 In the Army Corps of Engineers Coastal Storm Risk Management Feasibility Study, Belle Haven is in the crosshairs for flooding potential, so a solution named “Alternative 8,” was the topic at the community meeting on June 14. This plan features a levee and floodwall running from a spot up by Belle Haven Pizzeria, out to the George Washington Memorial Parkway, south to a potential levee by Westgrove Dog Park. The community crowd was not happy with it.

“This is terrible, nothing new,” said Ellen Young who was on the original task force when a similar plan was discussed about 10 years ago. What about the river level rising, the storms, the standing water in some backyards after a rainfall? “Who knows, is it rising?” she asked. “Where they do need the wall is on the east side of the [bike] trail.” There was lots of agreement on putting the wall across the parkway from Belle View but that’s National Park land. National Park Service superintendent Charles Cuvelier was there, but just as a listener in the back of the cafeteria.

“We would like to see a berm on the east side of the parkway,” reiterated Steve Keating.

Other issues brought up by the 200 people in the school cafeteria were the height of the wall, past storms, the Dyke Marsh, wildlife, the River Tower parking lot, and the benefit-cost ratio. 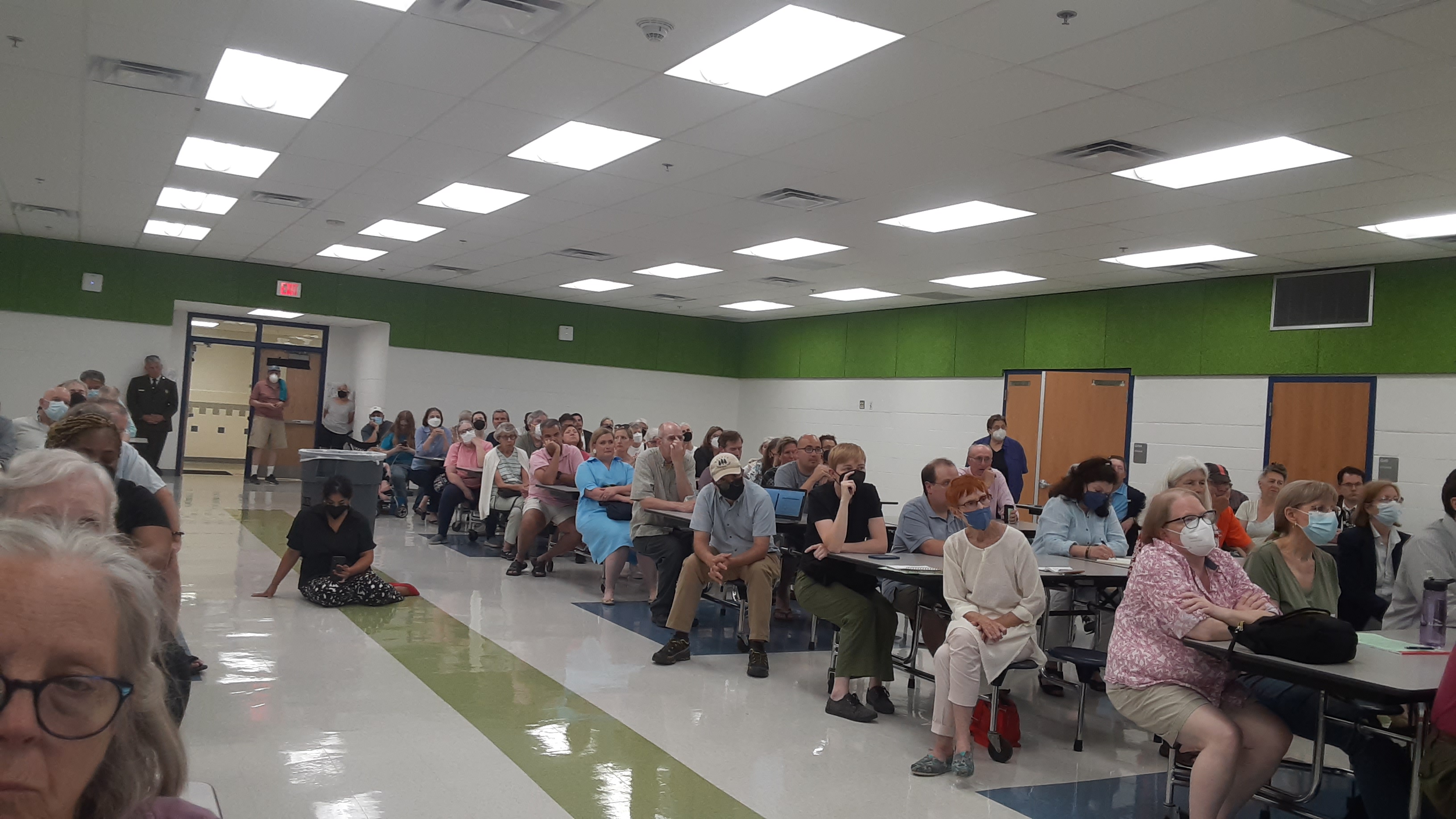 The numbers stood out though – there would be 400 feet of levy, 5600 feet of flood walls, and five roads closed, although they did not point the roads out by name. When the question of emergency vehicle access and flooded roads or walls, there wasn’t much of an answer. “That’s typically addressed at a more local level,” said Katie Perkins of the Corps of Engineers.

According to the findings, the study area encompasses approximately 76 square miles which includes Northern Virginia, the Middle Potomac watershed boundary, Arlington County and a portion of Prince William County. 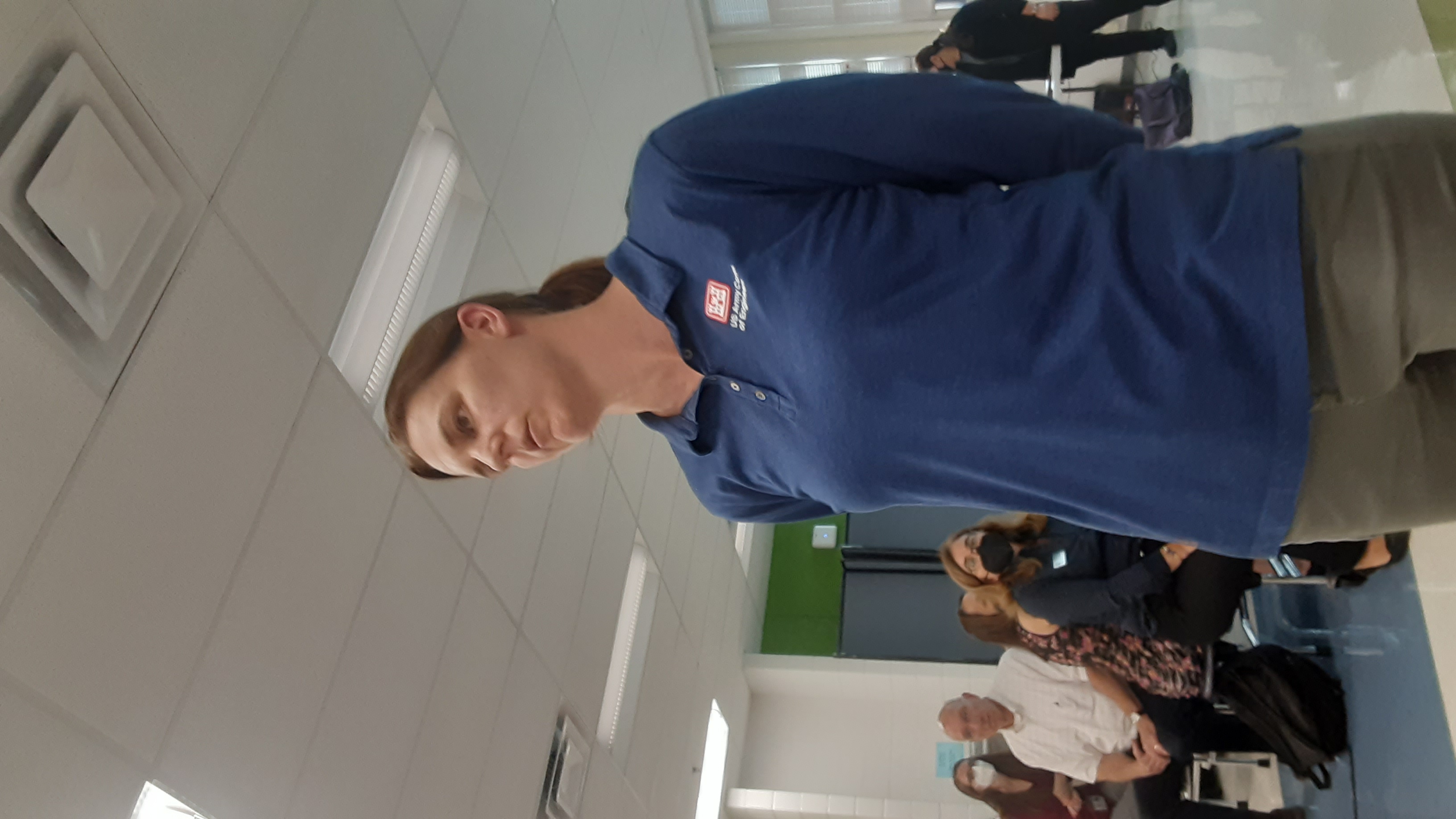 Katie Perkins of the Corps of Engineers.
The Army Corp of Engineers study cited problem areas in Northern Virginia that include the Potomac River waterfront in Arlington and Alexandria and along Cameron Run and Four Mile Run in Fairfax County, which drain into the Potomac River. Coastal flooding can endanger lives; prevent access to evacuation routes and critical infrastructure; and cause property and economic damages, it said. There are a number of places they call "critical infrastructure," in these potentially threatened areas that include transportation facilities, water, freight and national security locations.

Belle Haven is not the only area where a floodwall would be needed. In Arlington, they are looking at a floodwall along Four Mile Run in an area that was underwater during Hurricane Agnes in 1972. For anyone that remembers Hurricane Agnes, there were high water marks painted on the surrounding buildings that remained there for years following the flood as a reminder.

As far as a timeframe for these walls, the Corps of Engineers are expected to start designing the structures in fall 2024, but an actual build date is sometime in the late 2020s. There is no funding source at this time. Comments will be collected between July and September this year. For more information, go to www.nab.usace.army.mil/