Can Cinder Bed Bikeway be in harmony with ecosystem? Bike group supports the new trail. 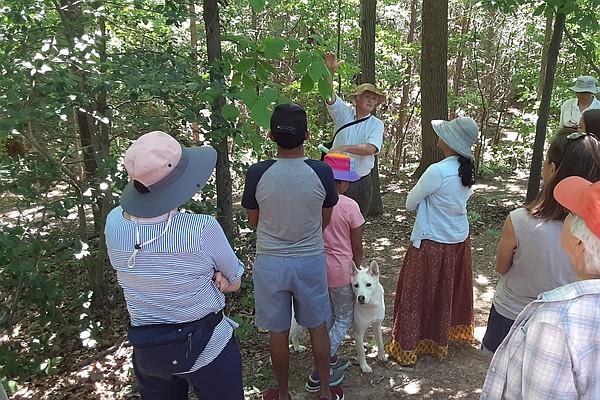 There are several battles going on in the thick forest off Beulah Street in the Island Creek area that has residents, activists and insects in an uproar.

The American Holly tree is trying to grow fruit for the birds, the native blueberry plant is seeking enough sun to produce fruit, the English Ivy is a harmful invasive plant that’s just in the way. The Cinder Bed Bikeway project is the elephant in the room that is planned to be built soon regardless of how the ecosystem is disrupted.

The bikeway is partially built now, but the last section, “Segment Six,” will cut through the thick forest, eliminating several trees, undergrowth species vital to the birds, and tranquility that many seek in this area. The plan calls for path lighting in the woods which will include lots of digging and eliminating cover for many that depend on a dark night when they feed.

“Lighting in the woods is something we’re concerned about but not the only thing,” said Renee Grebe of the Audubon Naturalist Society who was recently on a tour through this forest led by Alan Ford, the president of the Virginia Native Plant Society’s Potomac Chapter. Preserving the environment is difficult in the face of transportation and development, including the Ciderbed Bikeway plan. “The process to build this trail doesn’t address the environmental concerns,” Grebe said. “The car infrastructure seems untouchable.”

The trail is supported by Fairfax Alliance for Better Bicycling, “The proposed trail will benefit all future users, whether they travel by bike, on foot, wheelchair, or other active transportation mode,” said Bruce Wright of FABB in a letter published in the Connection in March. “The proposed trail is included in the County Bicycle Master Plan and the Countywide Trails Plan and has been in the works for many years.”

Ford led a group of about 15 Island Creek and Amberleigh residents on one of the many dirt paths down the hill towards Long Branch which will parallel the bikeway all the way to the Franconia-Springfield Metro Station. The bikeway is partially in the Mount Vernon District and partially in Lee District, so it’s on both Supervisor Rodney Lusk’s (D-Lee) and Supervisor Dan Storck’s (D-Mount Vernon) radar.

So far, they’ve been voicing their concerns but haven’t seen any options from officials. “We’re working to open that conversation,” said Grebe.

Also on the walk with the Island Creek residents were Betsy Martin of the Audubon Society of Northern Virginia, Philip Lakusa of the Friends of Accotink Creek and Ann Bennett of the Sierra Club.

On the trail, Ford pointed out a rare plant called Indian Pipes, a few 100-year-old native trees and the dreaded “Oriental Bittersweet,” another invasive species. “It strangles trees,” he said. Another plant he identified was sassafras, he called “the original fruit for root beer.”

According to the Fairfax County Department of Transportation, the Cinder Bed Road Bikeway project will provide a continuous shared use path between Newington Road and the Franconia-Springfield Metro Station. A shared use path will be constructed along the west side of Cinder Bed Road, connect to an existing trail through Fairfax County Park Authority property, and then continue through private property to tie into the trail at the end of Barry Road that leads to the Franconia/Springfield Metro Station. Construction will include two pedestrian bridges to cross Long Branch. The project length is approximately two miles.

At the northern end, the trail will connect to Barry Road and nearby residents currently use that trail to get to the Metro station. Construction on the Bikeway is scheduled to begin in November this year and be completed in May 2024. The total price tag is $14,750,000.