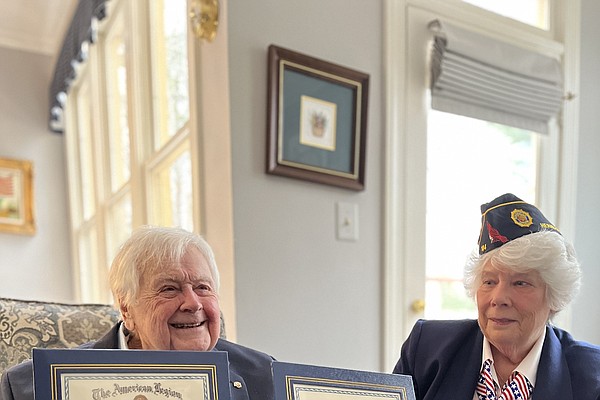 Richard T. "Dick" Russell Jr., of Great Falls, a Purple Heart recipient and World War II U.S. Army Air Force, 5th Air Force veteran, celebrated his 100th birthday on Sunday, March 6. Russell is a member of the Greatest Generation, a group of people born between the years 1900 and 1927 who grew up in a time of economic depression and later served in the Second World War. Of the 16 million U.S. veterans who fought in World War II, approximately 240,000 remain alive, according to the US Department of Veterans Affairs in a report dated Jan. 5, 2022.

Russell's birthday party, held at the home of friend Amy Miller and marked by the presence of loved ones and acquaintances both old and new, did indeed commemorate Russell’s chronological age of 100 years. It was also celebrated that Russell had made the most of the years he had been gifted and that his service years helped mold the man he became. Russell epitomizes and demonstrates characteristics of the Greatest Generation: personal responsibility, duty, honor, and humility.

The Greatest Generation acquired its name from a book of the same name authored by Tom Brokaw, a journalist for NBC. As Brokaw says in his book, the men and women of this generation did not fight for fame and recognition but fought because it was the right thing to do. 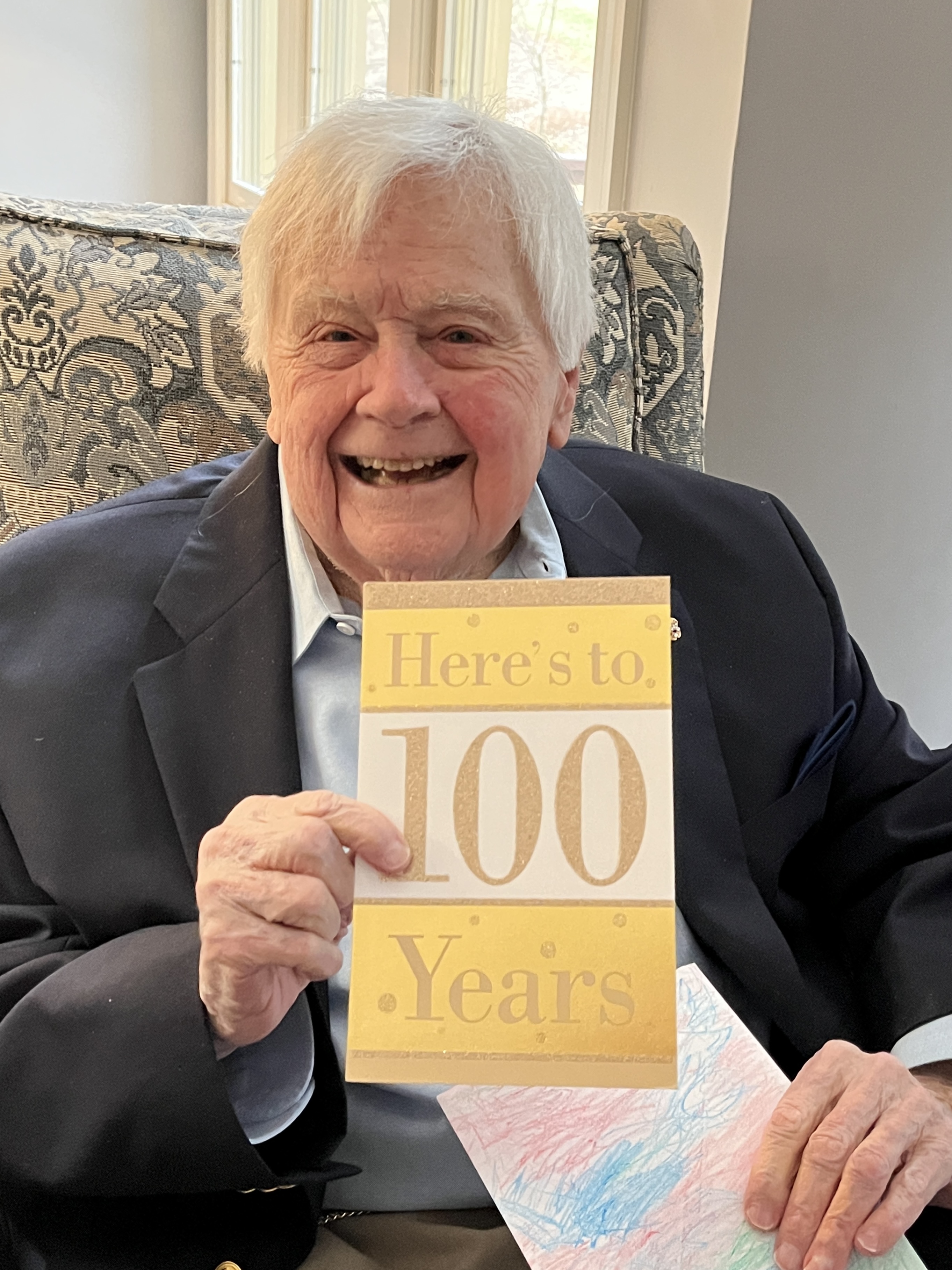 Centered in prominence on the fireplace mantel and placed in sequential order, framed photos told Russell’s life story from childhood, to enlistment, to his marriage to Florine Curtin Bealland, and more. Russell's trademark grin, which crinkles the corners of his eyes and flexes his cheeks upward, can be seen in each photograph, a physical trait that has remained unchanged even at the age of 100. Russell's framed Army Air Force medals, patches, and pins took center stage.

His daughter Karen Russell said that from 1943 to 1945, her father served in the US Army Air Force (USAFF), 5th Air Force as part of the 43rd Bombardment Group of the 5th Air Force (USAFF) and flew B-24 "Liberators" in the South Pacific. He flew 43 missions in a variety of roles, including radio operator, rear tail gunner, and bombardier — whatever was required given the high casualty rate. He was promoted to TSGT (Technical Sgt.). Russell was a member of Ken's Men and was involved in significant engagements in Balikpapan and Borneo.

Reminiscing about his military service, Russell’s smile faded. He said that the majority of his time was in combat. “There weren’t many happy memories. We were losing a lot of people, friends. It was tough,” he said. “I was on a B-24. We were a 10 man crew. Some things made me very sad. I was wounded. Four members of my crew were wounded. So, five members were Purple Heart members. One of those Purple Heart members paid the severe price. He was killed, blown apart."

Russell said one of his saddest moments was when they landed at a secondary base, and he saw his close friend's remains being taken off the aircraft. "He was a navigator; I was on the radio. And we compared notes on where we were when we flew. It just hurts to see somebody killed right in front of me," Russell said.

"When I was discharged and starting my life over again. I was 23," Russell said, remembering the time he was the happiest. Russell shifted his gaze over to his daughter, Karen. "I’ve got my little daughter over there. Seventy-two now, and that makes me a few years older."

Russell said what he values the most are those who fought during World War II, what they did, and what they endured. "They gave us the freedom we got today because it was a fight. If we didn't defeat Hitler, we would be having hobnail boots up our rear-end right now." 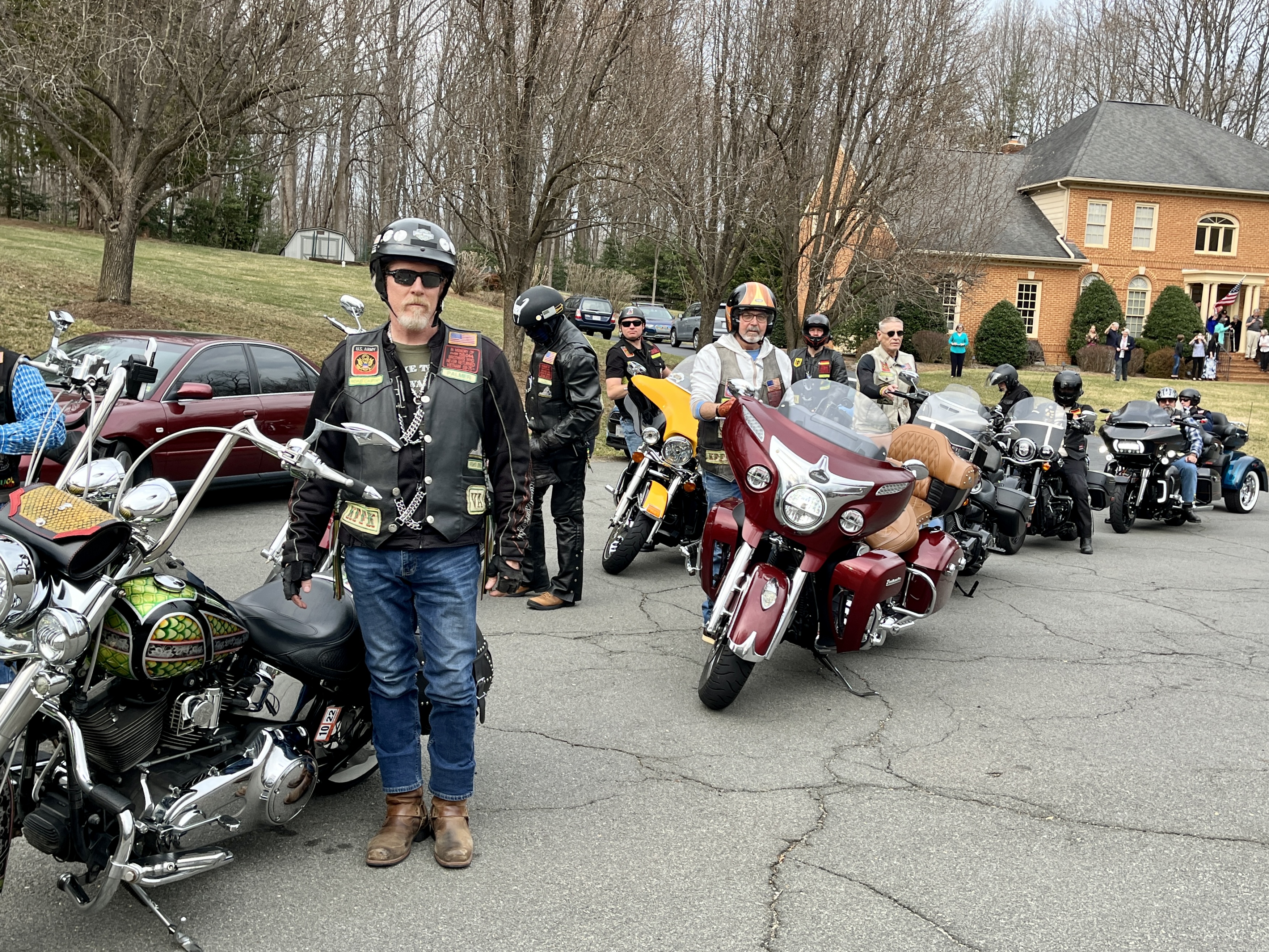 A few moments later, Christine Cutler, Post Adjutant of The Wayne M. Kidwell Legion Post 184 Herndon-Reston, presented Russell with a Certificate of Honor signed by David Womack, CDR, Post 184. It stated in part: "In recognition and grateful appreciation for serving in the United States Army Air Corps in the Pacific Theater in World War II in the name of freedom and democracy, and for allegiance to God and country in courageously protecting our liberty and intendance." She also presented a Certificate of Initiation to Post No. 184 and other gifts. Russell graciously accepted them and Cutler’s congratulations on the notable occasion of his birthday.

Russell made his way outdoors to the front porch. He and others stood and watched while the Virginia Chapter of the Nam Knights, an American Military Veteran and Law Enforcement Motorcycle Club led by Jorge "Norton" Miranda, president, cruised the cul-de-sac. They rode in a side-by-side formation to commemorate Russell's birthday and pay tribute to his service.

Invited indoors for a presentation, Miranda told Russell that besides coming to wish him a "very, very happy 100th birthday," they also wanted to thank him for his service. "And I want to thank you for your wife's service as well. I understand she was a Marine," Miranda said. "I understand that your father was a Marine as well, in World War I." Russell told Miranda that his mother served in the Navy.

"You've got quite the lineage of military service to the nation," Miranda said.

On behalf of the Nam Knights, Miranda presented Russell with a flag in recognition of his service, as well as a coin to wish him a happy birthday. 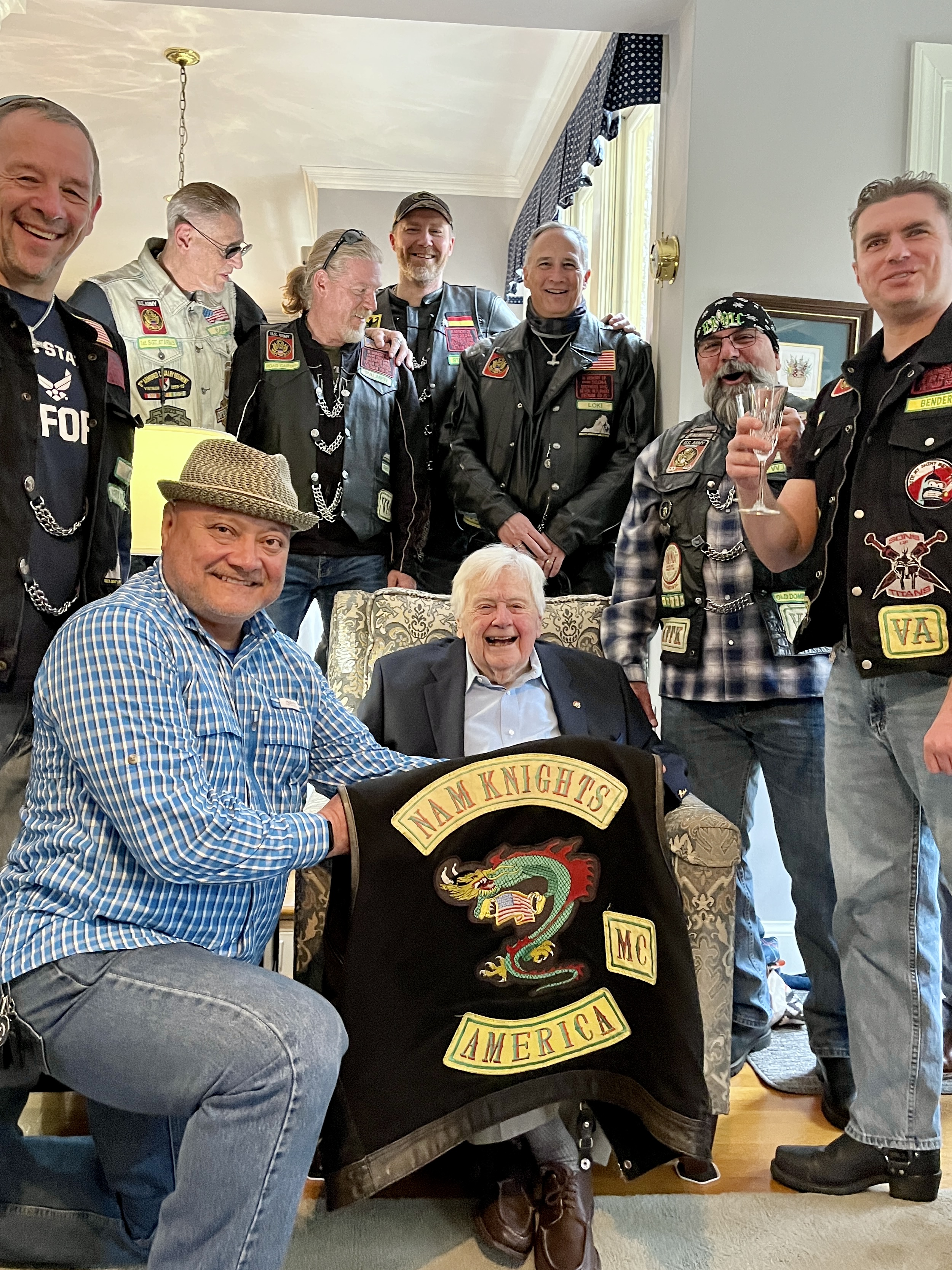