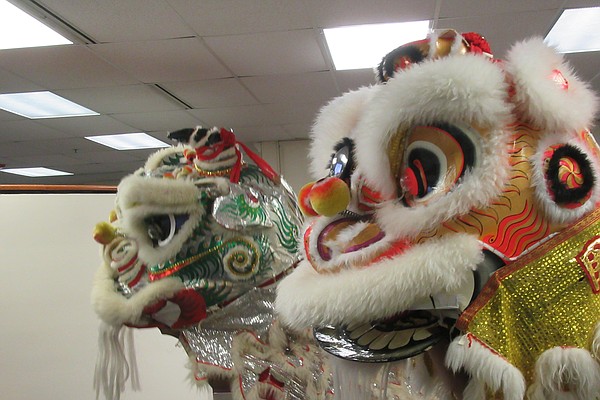 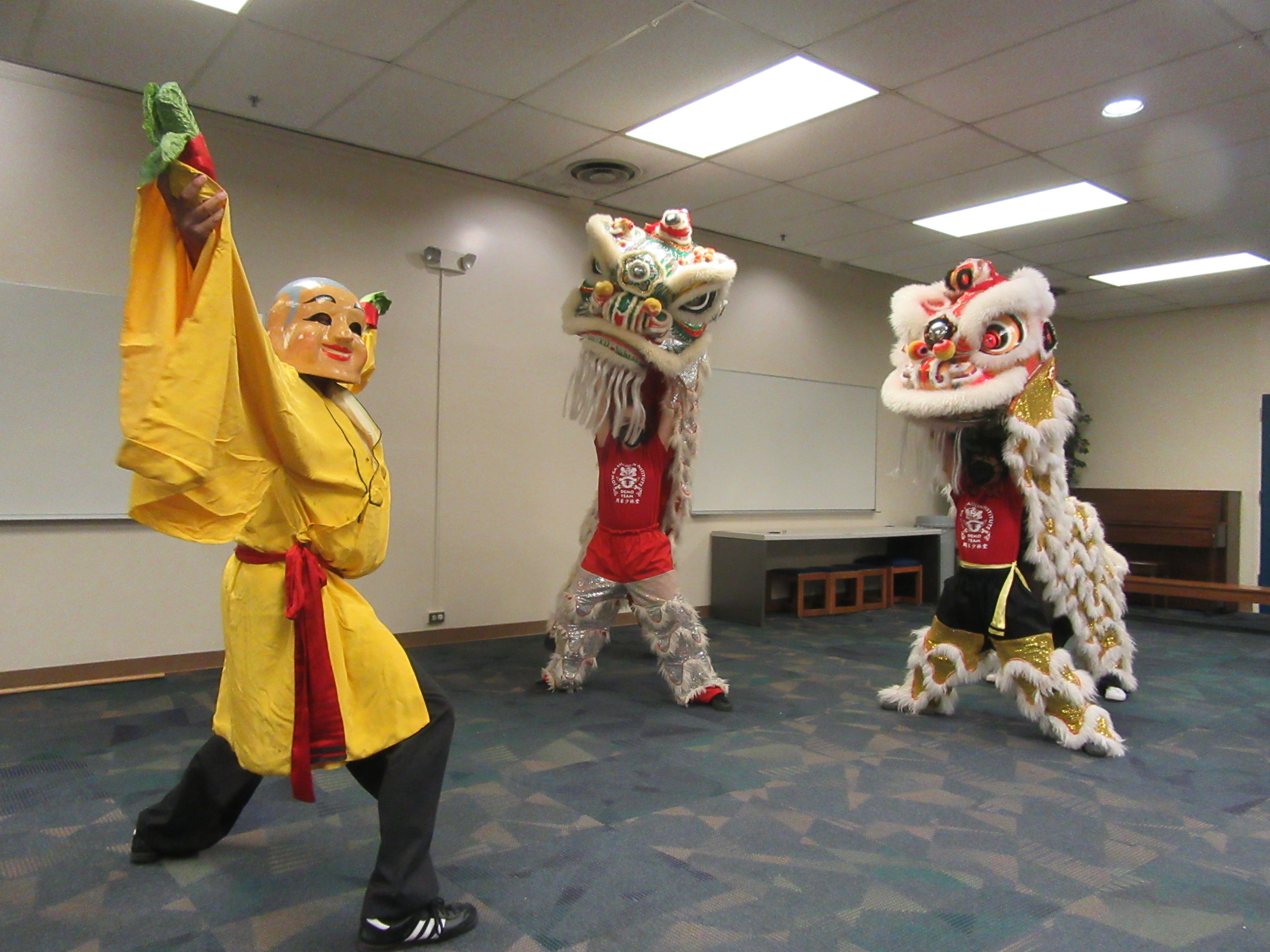 At Mount Vernon’s Sherwood Regional Library, dancers ages 10 to adult transformed into two glittery, colorful lions that undulated, reared up on their hind legs and twisted their oversized heads back and forth, in a choreographed dance that is thousands of years old. Each lion consisted of two people who coordinated to make the lion come alive. The front dancer was the lion’s front limbs and manipulated the head. The other dancer was the lion’s back and hind legs. Together, for 15 minutes, they imitated a lion’s movements paced to the rhythmic music of a drum, gong and cymbals.

In traditional Chinese culture, lion dances are part of Kung Fu training and performed for many celebrations, including the New Year, this year on Jan. 22, the first day of the Year of the Rabbit. Lion dances are intended to bring good luck, happiness and prosperity.

The Buddha, wearing a full-head mask bearing a bright red smile and a bright yellow robe, swirled around the room and teased the lions with their favorite food, represented Saturday by lettuce, as they chased him. The lions successfully took the prized lettuce, tore it into pieces and flung the bits out to the crowd to bring them good luck.

Attendees were dazzled by the elaborately painted, oversized lions’ heads imported from China and made of bamboo and paper maché. The heads can weigh from five to 15 pounds. The front dancer made the lions’ eyes move back and forth, the eyelids blink and the mouth open and close. A mirror between the eyes is intended to scare away evil spirits and a horn on the top of the head to fight evil. The lions’ bodies were made of sparkling, sequin-covered cloth and fake fur. The lions’ legs were the dancers’ legs, satiny red pants decorated with sequins and faux fur. Red and gold are traditional Chinese colors which represent good luck.

Sarah Parker played the drum, which reached almost to her waist from its stand. Her drumming set the pace for the dancers, including her three daughters. Trinity, age 17, has done Kung Fu for nine years and danced for seven. “I enjoy it,” she said, preferring it to the hip-hop favored by many teens.

Instructor Steve Johnson likes to take the dancers “to libraries for cultural outreach,” he explained, especially around the Chinese New Year. Dancer Mike Kammer said he grew up watching Kung Fu movies. On the lion dance, he remarked, “It’s a lot of fun and good exercise. It builds a team. It’s exhausting, but fun.”

Local fans of all ages were enthralled. Colleen Walker, who lives in Collingwood, said, “It was intriguing. I always wondered what was under those heads. It’s more than pure entertainment.” Her friend, Deanna Jones, Williamsburg Manor North resident added, “It was exciting to learn about the culture and especially see the kids speaking to the crowd.” Some of the young dancers did a Kung Fu demonstration before the dance and explained it to the audience. 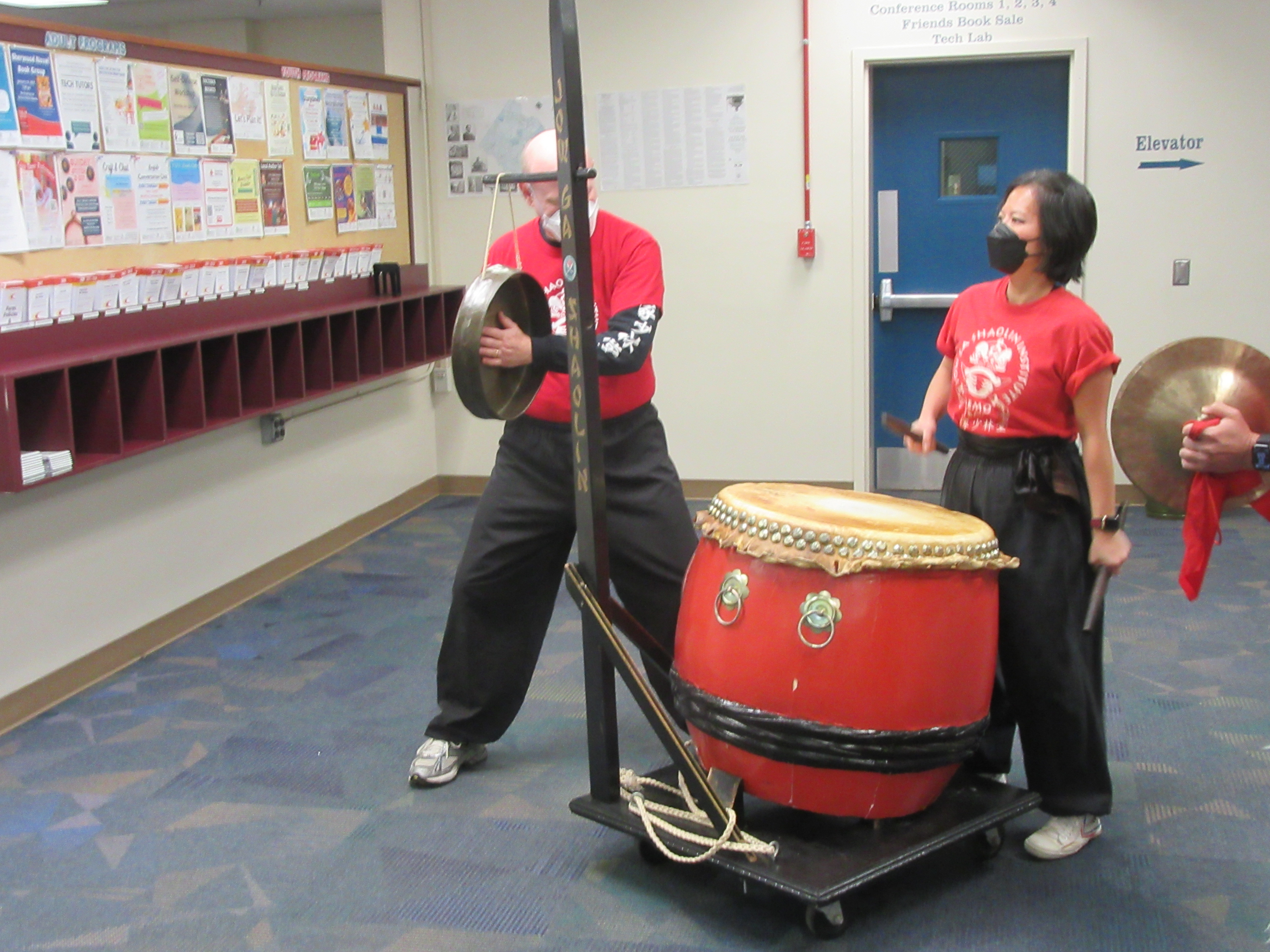 The Lion Dance and Dragon Dance are the main attractions of many Chinese festivities, like banquets, weddings, birthdays and other events, says Allie Shaw, the Institute’s dance coordinator.

The Jow Ga Shaolin Institute was founded 22 years ago. “We teach anyone who wants to learn,” says Shaw. Visit https://www.jowgashaolin.com/.