Sit back, relax and enjoy your cocktail and truffle popcorn 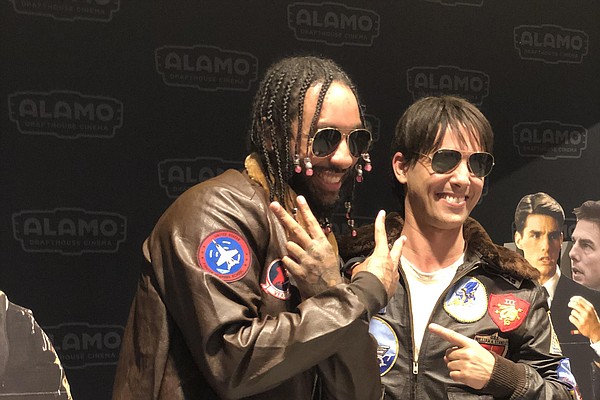 It’s movie weather. Good thing the Alamo Drafthouse Cinema Crystal City has finally “taken flight.” On opening night in October, Anthony Coco was excited to show invitees around the new cinema. “We did this deal five-and-a-half years ago,” he said, referring to his company Cojeaux Entertainment, which holds the Alamo Drafthouse Cinema franchise for the D.C. region, “but the pandemic and the subsequent logistical problems with building materials meant we had to delay the opening to late October 2022.”

The Crystal City location is the third Alamo Drafthouse Cinema in the Northern Virginia area: the first two are in Ashburn and Woodbridge.

Those invited to the opening event were excited too. “I love the brand,” said one journalist. “I love that the bar is aviation themed and that we are here to watch an aviation movie (the movie was Maverick, with Tom Cruise). I love that there are 70 or so vintage movie posters - collectors items - on the walls.”

As the bar began to open, Coco noted, “The bar is open even if you aren’t coming to the movie.” The theater’s bar, Departures, harks back to the heyday of air travel with flight related movie posters portraying some iconic moments of airplanes in the movies. Departures bar has a mix of local and national craft beers, wine, and a special drink menu of signature cocktails. It has an outdoor deck and a pretty view.

The Crystal City theater is one of the largest of the Alamo theaters with 915 seats. There are nine theaters, with the “Big Show” theater holding 237 seats with a 66 foot screen, and Dolby Atmos sound for an immersive experience. Each theater has accessible seats. Care has been taken to assure that every seat has a good view of the screen.

Coco continued, “One of the things that sets the Alamo cinema apart from other theaters is the programming mix. They do some free screenings of classic films, repertory cinema, a film club for cinéphiles, and we make custom buttons for them and we talk about the film afterwards. We do movie parties, like the Rocky Horror Show party. We do an Epic Sunday once a month, and we do relatively new releases that are visually interesting. We do private events once a week. Community outreach, charitable contributions, and private and corporate events set the cinema apart from others.”

Coco emphasized the scratch kitchen aspect — the custom-designed kitchen includes state of the art equipment for the main menu which is 98 percent created in-house. In addition to a core menu of favorites, the kitchen also prepares meals to order by a team of cooks, and will do seasonal specials, specific specials for movie events, a kids menu and a vegan menu. They use real clarified butter on the popcorn. Chicken nuggets are hand-breaded, cooked there … and addictive.

In the Big Show theater, some of the logistics of the movie experience à la Alamo include call buttons on the console in front of each seat for food ordering. There is a strict “don’t talk, don’t text” philosophy, so all phones have to be silenced. (Madonna was once kicked out of an Alamo theater for not adhering to that policy.) The rule reflects the Alamo’s core value: enjoying the movie and having fun. You can’t arrive late either. The focus is on the film.

There were other aspects of the Alamo Drafthouse Cinema apparent at the event: guests included people like Karim Mowatt, whose film “Lorton: Prison of Terror,” outlines Lorton's strange journey from utopian prison farm to reviled penal colony. Mowatt said he highly recommends the film Saint Omer, just arriving in U.S. theaters, a film by Alice Diop, the first black woman directing a feature film in France.

The crowd at the opening was young, hip, diverse, and excited that Crystal City and Arlington were joining hip towns like Austin and Denver with the advent of the Alamo. This was, after all, the original idea back when the Arlington County Board approved the first phases of a major redevelopment of Crystal City’s central business district, to include the Alamo Drafthouse Cinema, so residents would have places to shop, eat, and be entertained.

The location’s development is located near the Crystal City metro station and offers garage parking directly below the theater with validation available to Alamo guests.