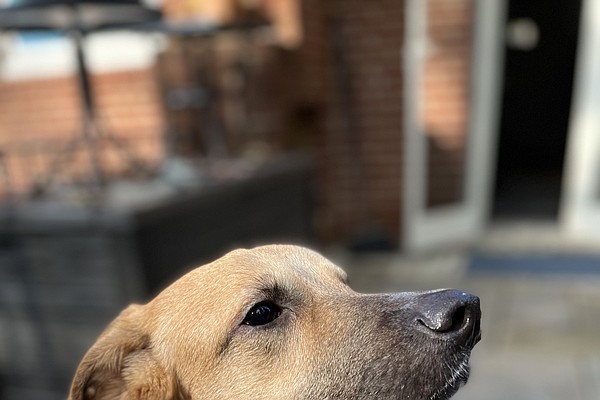 After spending the first two years of his life fighting to survive on the streets of Puerto Rico, Gordon now enjoys life’s simple pleasures. Once a struggling stray dog who suffered crisis after crisis, he now lives for bedtime – when he can catch some peaceful ‘z’s while nestled against his foster mom.

“At night, he can’t wait to curl up into bed and just sleep with me,” Lori Whitehand, Gordon’s foster mom with the Lost Dog and Cat Rescue Foundation, said. “I think that’s his favorite time of day. He gets to jump into bed and snuggle with me for seven or eight hours. He’s just the sweetest and super affectionate once he gets comfortable with you. You can wrap your arms around him and he loves it. It helps him feel safe.”

Less than a year ago, the now three-year-old Gordon was homeless and living on the premises of an electric utility company in Ponce, Puerto Rico. And he just couldn’t catch a break.

As a puppy, he was attacked by a group of fellow stray dogs – known as “satos” in Puerto Rico – leaving him with both physical and emotional scars. Then, to add insult to injury, one day, Gordon was resting beneath a truck when a driver revved up the engine and began to drive. Gordon suffered a head injury, leaving him blind.

Finally, Mildred García took Gordon in and gave the resilient pup his first home. In a letter to LDCRF, Mildred described Gordon as “playful, sweet, and happy.”

There are hundreds of thousands of stray dogs like Gordon throughout Puerto Rico. There are also many Puerto Rican rescue groups that work hard to transport many of these dogs to the mainland United States, through both official and unofficial partnerships with stateside counterparts.

Mildred Garcia had ties to a local rescue group in Puerto Rico, which has a relationship with LDCRF. This Puerto Rican organization paid for all of Gordon’s early healthcare and transportation to Virginia, where Gordon arrived in early 2022.

After his first loving LDCRF foster mom, Ashley Dempsey, could no longer keep her cat and Gordon – who enjoyed chasing said cat – in the same home, Gordon landed in the equally loving home of his current foster mom, Lori Whitehand. He has been living with Lori – who has fostered many dogs with LDCRF – since mid-October of 2022.

“It didn’t take Gordon long to map out my house,” Whitehand, who had never before cared for a blind dog, said. “It took a little longer for him to develop trust, so patience was really the key. It was a very hard first ten days with him being very shut down, but he has since opened up beautifully.”

Now, Gordon is happy and overall relaxed in his new foster home while waiting for his forever family.

Under different circumstances, Lori herself would keep Gordon permanently, without question. However, after losing her husband to cancer, and then losing two beloved dogs – all in 2022 – she is now hoping to enter a new phase of life.

Lori also knows that Gordon would thrive in a home with a patient owner who has another dog – a guide dog of sorts – who would navigate him through the world that he understandably finds overwhelming at times.

“My hope would be for Gordon to find a home with another mature dog – one that is calm and can interact with him,” Whitehand said. “He’s so perfect and well-behaved … the one thing is, he is just so timid. That’s probably one of the things that another dog would help with, and that people would need to get used to.”

Gordon would be the perfect companion for a single person or a couple with a quiet household – and with another dog, of course. Owners with a fenced-in yard would also be ideal.

“They would have to be very patient and have pretty quiet lives – and not have cats,” Lori said. “Little kids who might be loud or make sudden movements around him would not be good, either. He always knows when someone new is in the house and will hide. When the person leaves, he emerges and will do a lot of sniffing to be sure he is safe.”

While Gordon is anxious, he’s certainly not reactive. He’s also happy to be home alone when Lori is out of the house for a few hours at a time.

“He’s a really easy dog,” Whitehand said. “He doesn’t get into mischief. He likes to stay in places where he’s safe and secure. After three weeks together, we were good. After three months, we have a great bond. He’s just pure joy. He’s a lovebug and there’s just something about him. If you want a companion – someone who just wants to snuggle with you and doesn’t require long daily walks – he would be perfect.”

Lori also noted that Gordon’s blindness shouldn’t intimidate potential adopters. His lack of sight does not stop him from doing anything that “normal” dogs do.

“Being blind is not a deterrent to him living a really good life,” Whitehand said. “It is not the cause of any problems he has with me. He mapped the house quickly. He loves to go outside in my backyard and is able to navigate steep stairs – he figured it right out.”

Aside from his blindness, Gordon – a 55-pound, mixed breed dog – is very healthy, according to an ophthalmologist that Lori brought him to in the hopes that some of his vision could be restored (which, unfortunately, could not).

Saying ‘goodbye’ to Gordon will inevitably be difficult for Lori, but she said she knows an even better home is out there for him.

In the meantime, she’s enjoying her time with the dog she says is one of the kindest souls she’s ever fostered – or even encountered.

“It was a hard year, retiring from my job to care for my dying husband, and also having two sick dogs,” Whitehand said. “But then it took me a matter of hours to fall in love with Gordon. He is the sweetest, most gentle, kind dog ever. Now I count on Gordon to fill my days with love.”